According to the results of the second quarter of this year, the Chinese company Xiaomi for the first time took the leading position in the smartphone market in Thailand. Such data are provided by the analytical company Canalys.

From April to June inclusive, Xiaomi increased sales of smartphones in Thailand by 200% year on year. As a result, the company’s share was 21%.

The second and third places with shares of about 19% were respectively Oppo and Samsung. The sales of the first of these companies decreased in annual terms by 2%, the second by 15%.

It should be noted that according to the results of the second quarter of this year; Xiaomi also took first place in several other markets around the world. Globally, the company is in second place. 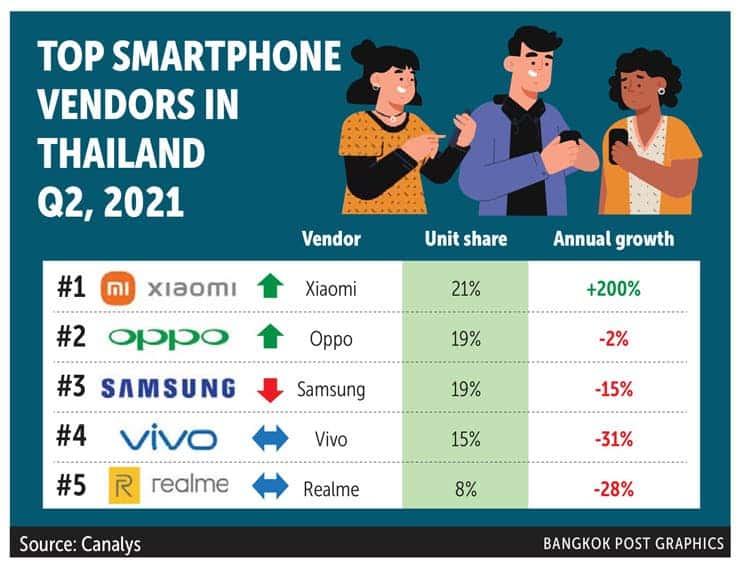 At the end of June, the Chinese company Xiaomi became the largest supplier of smartphones in the world, but at the end of the quarter, Samsung Electronics managed to maintain its leadership. The management of Xiaomi now claims that the company is faced with the task of gaining a foothold in the second position; and after three years it will confidently take the first one.

This week, as noted by the Nikkei Asian Review, Lei Jun, CEO and founder of Xiaomi; said: “Our current challenge is to gain a foothold in the second place in the global market. In three years, we aim to take the first place”. The company was founded 11 years ago; and this year marks the tenth anniversary of the announcement of the first smartphone. The founder of Xiaomi spoke at a festive event to celebrate the event.

Lei Jun recalled that back in 2014 he promised to turn Xiaomi into the largest smartphone manufacturer in five or ten years.

We should admit that Xiaomi’s success in recent months is partly due to the American ban of Huawei Technologies, which a little over a year ago was the undisputed leader of the smartphone market. In the second quarter of this year, Xiaomi took first place not only in Europe; but also in more than 20 countries and regions of the world. In June, the head of the company announced his intention to spend $ 10 billion on the development of the electric vehicle market, promising to personally lead this initiative. Over the past few years, the company has also increased its investment in building its own ecosystem; for the development of electronic components.