Realme already launched a bunch of smartphones under its Realme 8 series and is expected to introduce a brand new variant very soon. The Realme 7i is due for an upgrade and the Realme 8i is coming with this task. According to rumors, Realme is preparing certain big upgrades with this new model. Although the i-series always focused in the entry-level segment, it seems that some premium characteristics will reach this particular device. Among them, we can expect a 120 Hz refresh rate and a 50 MP camera to attend.

According to rumors, the Realme 8i will go official alongside another variant dubbed Realme 8s. The latter will pack a brand new MediaTek Dimensity 810 SoC that includes 5G capabilities. Now, the chipset behind the Realme 8i has been revealed as a 4G-only MediaTek Helio G96 SoC. The report comes from Digit that has all details and renders revealing the upcoming smartphone.

For those unaware, the Helio G96 is a refreshed version of the Helio G95 SoC and was released by MediaTek this year alongside the Helio G88. The new chipset is still based on the 12 nm standard and brings ARM Cortex-A76 cores. It just has tweaked performance for high refresh rate screens. Curiously, it currently stands as MediaTek’s top offering when you’re looking for a 4G chipset. 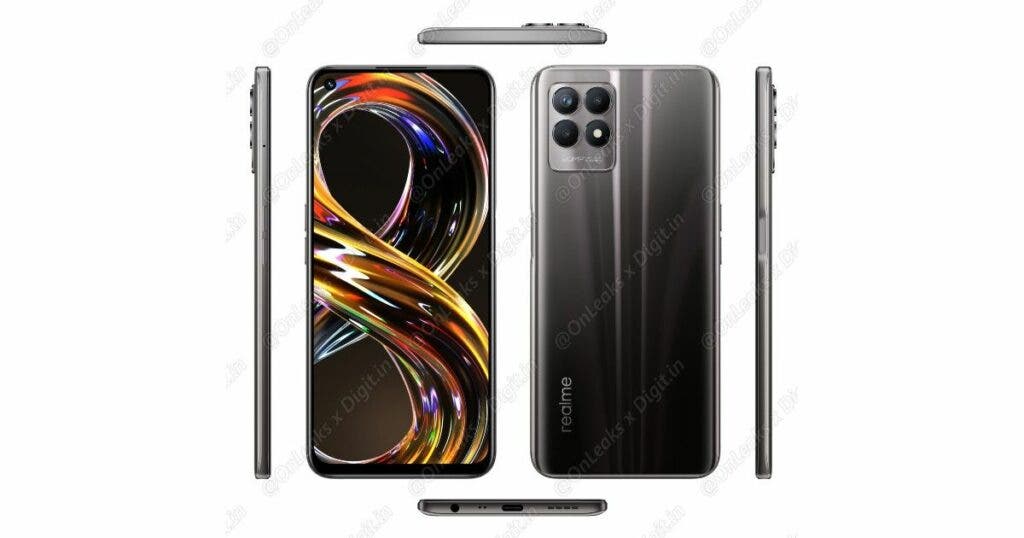 In addition to confirming the platform, the device also had its design leaked through press renders. Realme will stick with the faux glass back with shiny aesthetics and a gradient paint finish. The rear of the smartphone also appears to have dual-curved edges to improve the ergonomics. Further, the device has a squareish camera module in the top left corner. The device’s fingerprint scanner will double as a power button which certainly confirms the display as an LCD panel. The handset also features a USB C port and is likely coming with Wi-Fi 6 and Bluetooth 5 support.

According to rumors, the Realme 8i will pack a 50 MP triple camera. The Redmi 10 started the trend of 50 MP cameras in the budget segment, and the Realme 8i will follow suit. Unfortunately, apart from this main camera, the other two are lackluster depth and macro units with just 2 MP resolution. As usual in Realme smartphones, the front-facing camera lives inside of a top-left aligned punch hole. The camera itself is a 16 MP unit. The device’s display has 6.43-inches and it’s said to support a 120 Hz refresh rate. We can assume that the resolution will be Full HD+. Last but not least, it will sport a 5,000 mAh battery, and Android 11 with Realme UI 2.0 on top.

Next Snapdragon 898 To Come With Significantly Upgraded GPU