Vivo has just received a patent with the World Intellectual Property Organization (WIPO). It reveals a very innovative design implementation that consists of a detachable in-display camera module. The patent details a design where th camera module is a detachable one. It resembles a tiny building block, Project ARA fans will be excited about this. The camera module can be attached to a slot at one of the top corners of a compatible smartphone. Once attached, remains entirely hidden from sight. This leaves the entire display are available for viewing content. This can result in a lot of things such as easy-to-repair camera modules, upgradeable in-display cameras, and more. 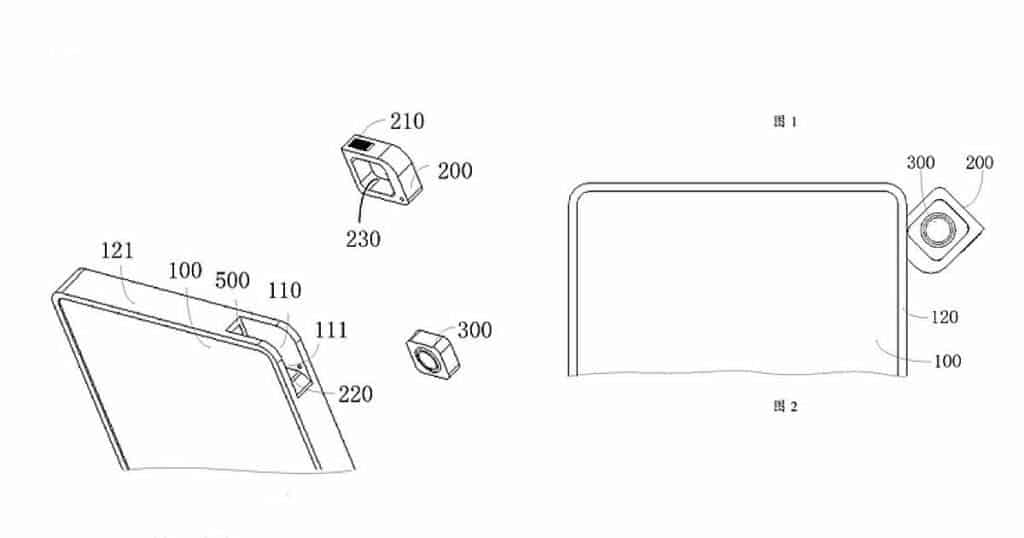 The detachable in-display camera module comes with a release mechanism that detaches the camera unit from the body of the handset. The patent details two moving procedures for the detachable in-display camera module. In the first one, the module rotates outward to serve as a typical front camera. The unit will be complete with its own lens element, and will therefore not be dependent on a tertiary lens attachment or the display itself to serve as the light receptor of the camera. The mechanism will presumably work similarly to the pop-out camera module that some companies used in the past.

Now the big mystery is how will the experience be with this detachable module. Unfortunately, the patent does not detail if the detachable in-display camera module will feature some sort of buffer memory and signal receivers in it as well. As per the report, if the module features an image buffer memory and a signal receiver, users can use it as a remote camera unit. Users could potentially place it in any position they please, away from the main smartphone body. The latter can serve as remote control of sorts. The camera can process the final image once the detachable in-display camera unit is back to the phone’s mainframe. Of course, the camera will also need some sort of energy to keep alive once it is detached.

Although the design is innovative, there is no proof that it’s already functional and practical. Moreover, having moving elements on a smartphone represent certain risks of mechanical failures. The detachable unit also adds worries of users losing the unit, it’s one more thing they’ll need to take care of. Of course, this is just a patent at the moment. There is no indication that Vivo is already working on a product with this or if it will ever do. Anyway, this is the best concept of a modular smartphone that we have had in years.

Worth noting that Vivo is one of the most innovative companies in terms of camera technology. For that reason, we may see something actually coming from this in the next years.

Previous Samsung has a new tactic to combat information leaks