Until yesterday, it was impossible to move WhatsApp chat history from iPhone to an Android phone. Honestly, we have been hearing various news suggesting that an iOS-Android migration tool will be available soon. But there was no official confirmation of this. Yesterday, the Facebook-owned company officially announced that the feature does exist. Moreover, it said that the first models to get this feature are the new Samsung foldable smartphones.

In fact, this was announced at the Galaxy Unpacked event yesterday, when Samsung said that users switching from iOS to Android would be able to bring their WhatsApp data to a Galaxy smartphone. They include both chats and media.

Also Read: How To Transfer WhatsApp Messages From Android To iPhone 12/11/X/8/7

“For the first time on any Android smartphone, you can securely transfer your WhatsApp experience — including your conversations and photos — from your old iPhone to your new Galaxy smartphone.”

At the conference, Samsung also displayed a demo of an iPhone transferring WhatsApp data to a Galaxy phone over a USB cable. 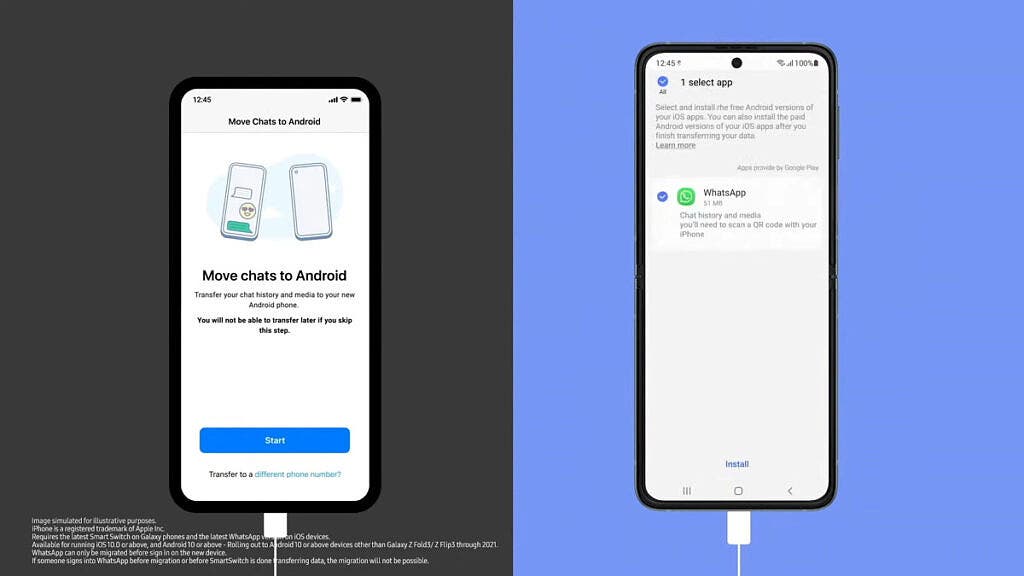 Later, WhatsApp confirmed to The Verge that this iOS-Android migration tool would allow data transfers from iOS to the Galaxy Z Fold 3 and Z Flip 3. Of course, other Galaxy models will be getting it in the near future as well. But for this, it’s a must to run on Android 10 and higher. Though WhatsApp hasn’t announced any specific date for other Android phones, some folks over at WABetaInfo, “beta version 2.21.160.16 of the WhatsApp app for iOS surfaces the new chat migration option for some users.” It allows users to migrate their chat history from an iOS device to an Android device.

Fortunately, later today, in a blog post, WhatsApp announced that it had begun rolling out the ability to transfer WhatsApp chat history from iOS to Android. It includes voice messages, photos, and videos. Moreover, this option is available on any Samsung device running Android 10 or above. But in the coming weeks, it will be available on more Android devices.

How to Transfer WhatsApp Data From iPhone to Android?

For this purpose, you’ll need a Lightning to USB-C cable. You should also note that there might be two separate WhatsApp backups (one on Google Drive and one on iCloud). If so, the iOS-Android transfer tool won’t merge them. So once you transfer the WhatsApp data from iPhone to an Android phone, it will overwrite your old Android backup.

However, if you don’t own a new Galaxy foldable phone, you can use the new “Switch to Android” app. It is a Google app for iOS.

Next Windows Subsystem for Android Comes to Xbox As Well