Chinese manufacturer, Nubia will hold a new product launch conference tomorrow by 3 pm Chinese time. At this event, the company will officially release the Nubia Red Magic 6S Pro. Today, the company released a poster that shows that it will also launch a magnetic charger that supports QI wireless charging + magnetic wireless charging. In fact, this charger also supports a stand. 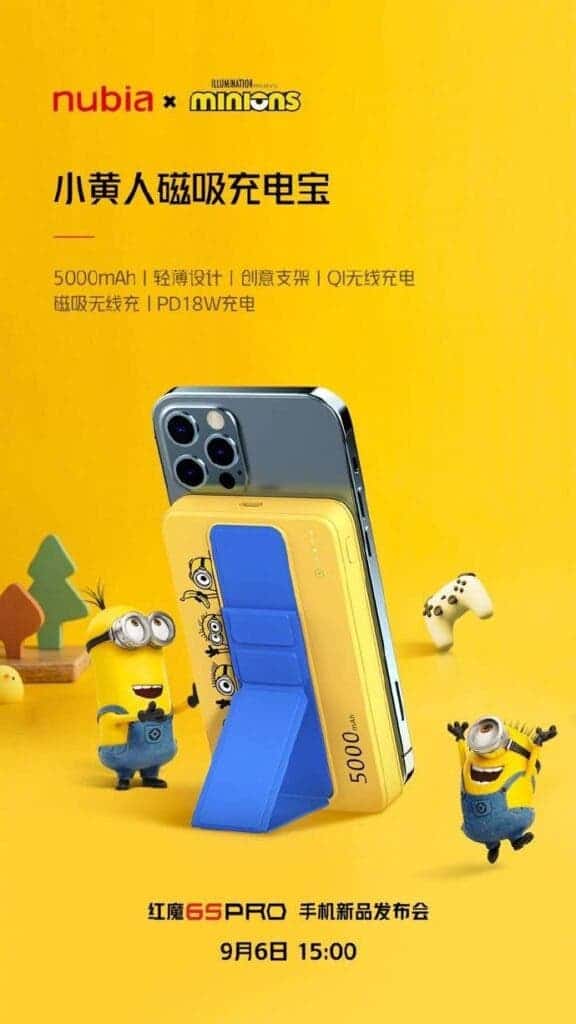 In the preheating poster, an iPhone was also used to demonstrate. From the poster, we can see that the wireless charger is very compact. When users use this charger as a stand, it effectively avoids the camera of the smartphone. The appearance is also attractive with classy elements.

The Nubia magnetic charger has a 5000 mAh battery capacity and supports PD 18W charging. Apart from this poster, there is not much information regarding this device. Obviously, we will hear more about the details and specifications of this magnetic charger at its launch event. Nevertheless, the Nubia Red Magic 6S Pro remains the protagonist of this event.

This smartphone will come with the flagship Qualcomm Snapdragon 888 Plus processor. According to the TENAA listing, the Nubia Red Magic 6S Pro will have multiple memory options including 8GB, 12GB, and 16GB of RAM. In terms of storage, the device will have 128GB, 256GB, and even 512GB.

The display of this smartphone supports a 165Hz high refresh rate and a 720Hz screen touch sampling rate. The screen click response time is only 7.4ms.

Under the hood, we will have a 4,500 mAh battery that supports 120 W fast-charging. The gaming phone will come with a turbo cooling fan alongside other measures such as phase-change thermal conductivity materials, graphene sheet, copper foil, and VC soaking plate. This will give this smartphone an excellent performance in terms of heat dissipation.

In addition, this device will support 500 Hz AirTriggers for immersive gaming performance. The device will come with ICE7.0 nine-layer multi-dimensional three-dimensional cooling system. According to the company, the charger can deliver a 100% charge from 0% in just 17 minutes.

In the camera department, the Nubia Red Magic 6S Pro will come with a triple rear camera setup. This module comprises a primary 64 MP camera, and we assume the other two cameras are for ultrawide and macro shots. Of course, the focus here isn’t a camera, so we’re not expecting a much-advanced camera system. For selfies and video calls, an 8MP snapper will get the job done.