According to a recent report, Apple has added a reminder to ask iOS 15 users whether they want to enable personalized ads in the first-party app. Apple’s “personalized advertising” uses the user’s App Store purchase history and other statistical data to inform news and stocks of the ads displayed in the App. Prior to iOS 15, personalized advertising options were not directly displayed to users. However, this option has always been there. It is usually hidden in Settings > Privacy > Apple Ads. Unfortunately for many users, this option is on by default. 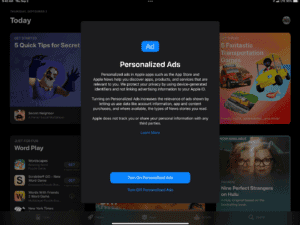 However, in iOS 15, Apple will open the official App for the first time. With this option, users will get a prompt on whether to allow personalized ads to be turned on. Thus, you do not need to navigate the device to turn off this feature.

However, it is important to note how this works and it appears to be detrimental to users. If you turn off the personalized advertisements, the advertisements you will receive will not decrease. However, the relevance of these adverts to you will decrease. This is because Apple will not know where you have been in recent times. Thus, it will just push random adverts to your device. Of course, this will be annoying for many users.

This change by Apple may be to avoid antitrust review. The official has previously restricted third-party advertising by introducing App tracking transparency. However, it did not restrict its own first-party advertising.

Apple has been planning to include a new system on its iPhones. This system seeks to target child abusers by tracking their history. However, this also means a lot of privacy issues and has met stiff opposition. Apple said recently

“Based on feedback from customers, advocacy groups, researchers, and others, we have decided to take additional time over the coming months to collect input and make improvements; before releasing these critically important child safety features.”

“We wish that this had come out a little more clearly for everyone; because we feel very positive and strongly about what we’re doing; and we can see that it’s widely misunderstood,”

“I grant you, in hindsight, introducing these two features at the same time was a recipe for this kind of confusion,” he continued. “It’s really clear a lot of messages got jumbled up pretty badly. I do believe the soundbite that got out early was, ‘oh my god; Apple is scanning my phone for images. This is not what is happening.”