Since the beginning of the year, we have been hearing rumors about the upcoming tablet from Realme – Realme Pad. The device was confirmed some months ago and is finally going to be unveiled this month. Interestingly, this is the second product from Realme from a completely new “computing” category debuting this year. Back in the last month, the brand finally unveiled its very first laptop in the form of the Realme Book series. The two devices were rumored to be launched together. However, Realme had to postpone the tablet for one more month. With the launch nearing the shores, we’re starting to see more details popping out. The latest bit comes straight from the company’s CEO Madhav Sheth.

Realme CEO for Europe and India, Madhav Sheth, took to Twitter today to disclose details about the new tablet. According to the latest teaser, the Realme Pad will pack a massive 7,100 mAh battery with 18 W Quick Charge support. Although this 7,100 mAh battery looks massive, we need to have in mind some of the device’s characteristics.

The Realme Pad will pack a 10.4-inch Display with a 2,000 x 1,200 pixels resolution. That resolution is beyond common 1080p and the display is massive, so the battery may not be so really impressive as it would be on a smartphone with a smaller display. Anyway, the company promises up to 12 hours of video playback on that screen with a single charge. That is pretty good for those who seek a tablet with good capabilities for overall media consumption. The tablet’s 18 W charging will happen over the device’s USB Type C port.

The tablet also has an 82.5 percent screen-to-body ratio which is quite good. The new tablet is also sleek with just 6.9 mm of thickness. 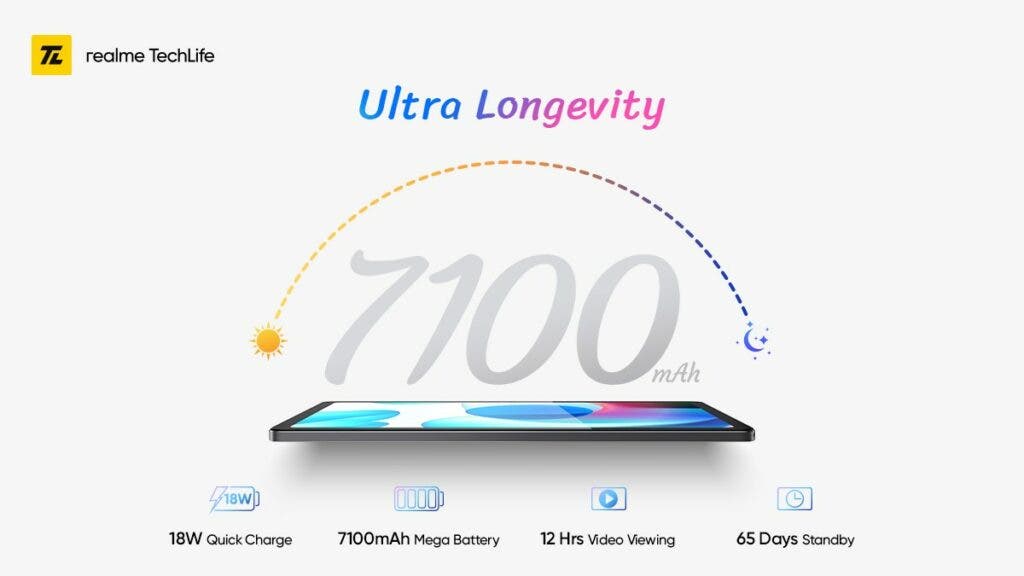 The new tablet is not a premium device

Those who have been waiting for a premium tablet were quite surprised by the latest leaks. The Realme Pad, according to a leaked Geekbench result will pack a MediaTek Helio G80 SoC. This is the very same chip found on devices such as the last year’s Redmi 9 from Xiaomi. It packs two ARM Cortex-A75 cores at 2 GHz and six ARM Cortex-A55 cores at up to 1.8 GHz. The graphics are ensured by a Mali-G52 MC2 GPU. As you can see, the device is just a mid-range tablet, and the focus here clearly is the budget segment. The Helio G80 will ensure decent performance for standard tasks and moderate gaming. We believe that Realme wants to deliver a solid device for media consumption and even studying at a low pricing point. After all, the huge 10.4-inch display is one of the big highlights in this device.