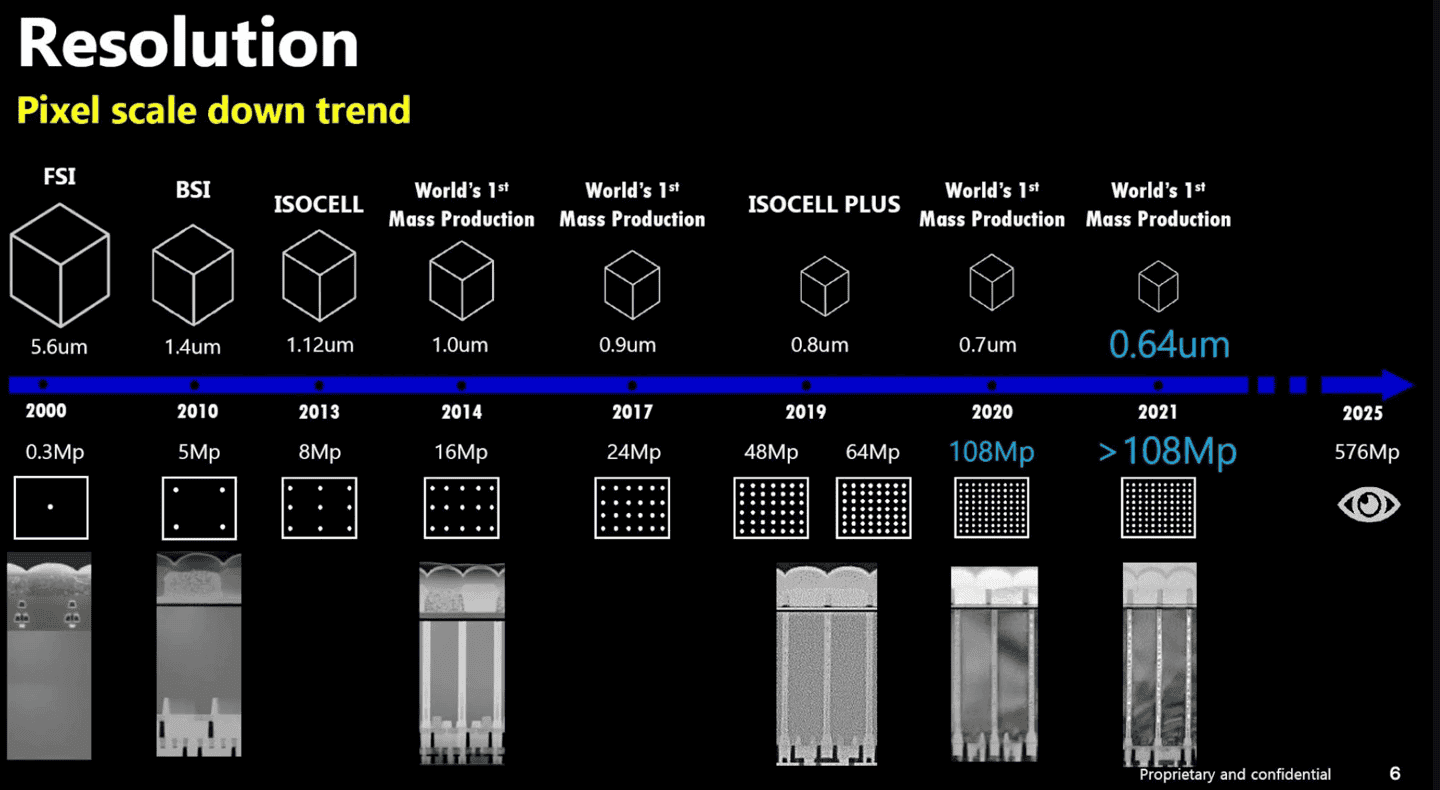 Haechang Lee, senior vice president of Samsung Electronics Automotive Sensors, used an interesting slide in his speech at the SEMI Europe Summit. The slide shows an overview of camera sensor pixel size and resolution trends since 2000. Also, it shows that Samsung plans to launch a 576-megapixel camera sensor sometime in 2025. However, this sensor may not appear in smartphones but in automobiles.

“For our latest 108Mp image sensor, the ISOCELL Bright HM1, we implemented our proprietary ‘Nonacell technology,’ which dramatically increases the amount of light absorption pixels are capable of. Compared to previous Tetracell technology which features a 2×2 array, the 3×3 pixel structure of Nonacell technology allows, for instance, nine 0.8μm pixels to function as one 2.4-μm pixel. This also mitigates the issue raised by low-light settings where light information is often scarce.”

The Samsung website mentioned earlier that the resolution of human eye matching is about 500 megapixels, and the company hopes to surpass this level. With its 576-megapixel sensor, it may achieve this feat. However, this does not necessarily mean that it will be convenient to use in smartphones. On the contrary, such sensors can be used in autonomous vehicles, drones and medical equipment. Autonomous vehicles also need super-powerful chips to process images and videos from such high-resolution sensors. So the assumption that such a sensor won’t appear on smartphones is quite logical.

Samsung’s 50-megapixel ISOCELL GN2 sensor will be a good choice for smartphones because of its large pixel size (2.8µm), dual-pixel autofocus, excellent HDR processing, 4K 120fps and 8K 30fps video recording, and low noise. The Galaxy S22 and Galaxy S22+ may use this 50-megapixel sensor.

The latter can take 100MP photos by re-arranging the color pixels using “an intelligent re-mosaic algorithm”. The 100MP photos have three 50MP layers in Green, Blue, and Red. Due to a special algorithm, the sensor overlays, upscale, and merges the image to produce high-resolution photography.

Also, this is Samsung’s first sensor to use Dual Pixel Pro. The latter is the company’s most advanced PDAF solution. Instead of splitting all the red, green, and blue pixels vertically, the green pixels are split diagonally. The top and bottom can read phased differences as well as the left and right sides. It results in faster and more accurate autofocus, especially in difficult conditions such as low-light environments or fast-moving objects.

Next Realme Pad will come with 7,100mAh battery and 18W charging