Moto G Pure has visited GeekBench with key specifications, confirming that the company is working on a new entry-level smartphone. Last month, Moto G Pure passed through multiple certification websites. This indicated that Motorola will be launching the handset soon. The smartphone manufacturer has already launched its flagship series of smartphones including the Motorola Edge 20, Edge 20 Pro, and Edge 20 Lite this year. Although the Lite variant is a mid-range smartphone, it has been included in the flagship lineup.

Now, the Lenovo-owned company is set to make its foray into the 2021 flagship market by introducing another smartphone dubbed, the Moto G Pure. The REL Canada certifications have already confirmed this moniker. Furthermore, the same model number has been spotted on the FCC, TUV, and Wi-Fi certifications. Also, the phone recently made its appearance on Geekbench. With the device making appearances on multiple certification websites, it is safe to assume that it is on the verge of hitting the store shelves.

The Moto G Pure could be an entry-level offering in the well-received Moto G-series smartphones. Although nothing is set in stone yet, the budget-oriented phone’s Geekbench listing has divulged some of its hardware specifications before the official unveiling. According to the listing, the phone will pack a 2GHz Helio G25 SoC under the hood. As far as preliminary Geekbench test results are concerned, the G Pure scored 135 in the single-core and 501 points in the multi-core tests. Furthermore, the device will ship with 3GB of RAM, and run on Android 11 OS out of the box. 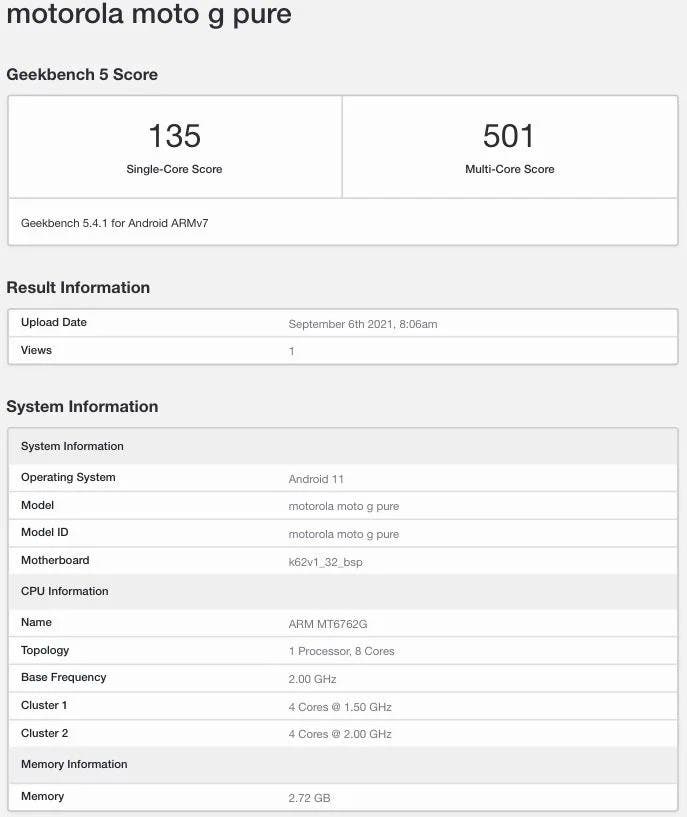 Regrettably, Motorola has remained mum on other key details such as the phone’s design, display size, and camera configuration. However, the phone’s TUV listing suggests that it will come with a 4000mAh battery, according to MySmartPrice. This cell will reportedly come with 10W charging support. Likewise, the phone’s REL Canada certification has revealed its model number as XT2163-4. If the Wi-Fi Alliance certification is anything to go by, the phone will run on Android 11 OS out of the box. Other details about the Moto G Pure smartphone are still few and far between. However, more details are likely to surface ahead of launch.

Motorola recently took the wraps off a new G series smartphone dubbed, the Moto G50. The phone sports a 6.5-inch LCD with a 90Hz refresh rate and an HD+ resolution. It packs a Mediatek’s Dimensity 700 chipset, coupled with 4GB of RAM. Furthermore, the device offers a hefty 128GB internal storage. The G50 houses a triple rear camera setup featuring a 48MP main camera, two 2MP macro, and depth cameras. A 5,000mAh battery with 15W fast charging support will be powering up the phone. It runs Android 11 OS based on Motorola My UX. It will retail for AUD 399 (about $289).