Counterpoint Technology Market Research has released fresh statistics on the global premium smartphone market. We are talking about devices that cost from $ 400.

According to estimates, in the second quarter of this year, the specified price segment recorded an increase of 46% on an annualized basis. At the same time, the total volume of the global smartphone market increased by 26% over the same period.

A large part of the premium market growth in Q2 2021 was driven by Apple, which reported a sales growth of 74% YoY in the premium segment on the strong momentum of the iPhone 12 series due to the iPhone users continuing to upgrade to 5G. Apple’s supply chain was also very resilient in managing component shortages and gained from the decline of Huawei in regions like China and Europe. Apple was the largest OEM in the premium segment across all regions.

The contribution of premium smartphones to the overall sales of cellular devices is growing. So, if in the second quarter of last year it was approximately 21%, now it is 24%. 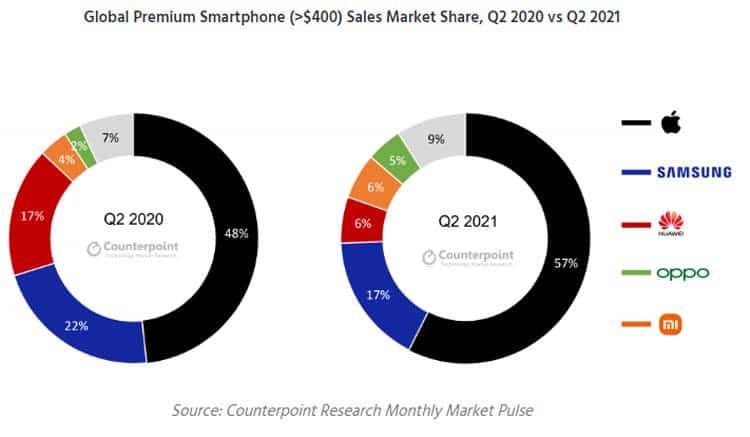 Apple remains the undisputed leader of the segment. Moreover, if a year ago this company controlled 48% of this sector, then in the second quarter of this year – 57%. This significant growth is due to the high popularity of smartphones of the iPhone 12 family.

Within the premium segment, while all the price bands saw growth, the highest growth (182% YoY) was seen in the ultra-premium band (>$800). This was mainly due to the strong momentum of the iPhone 12 Pro Max and iPhone 12 Pro. The Pro versions were available later than the usual September date, causing demand to spill over to the subsequent months. Apple captured close to 75% of the ultra-premium segment, compared to 54% a year ago. This shift also indicates that more consumers now prefer high-end devices; after realizing the importance of smartphones to them during the COVID-19 lockdowns. A section of consumers also had extra savings while working from home, which they invested in devices like smartphones.

Samsung is in second place in the ranking. The share of the South Korean giant fell from 22% to 17% over the year. China’s Huawei closes the top three: under the yoke of US sanctions, the company lost ground from 17% to 6%.

In addition, the top five include Xiaomi and OPPO. Both of these companies strengthened their position: the first – from 4% to 6%, the second – from 2% to 5%.

Previous Insiders leaked screenshots showing what MIUI 13 will look like

Next Comparison: iPhone 13 vs iPhone 12 vs Android competitors