It could be concluded that in the last quarter of this year we are waiting for the announcement of the Google Pixel 6 and Pixel 6 Pro and on this, the plan of the premier flagships of 2021 can be considered fulfilled. True, there is a possibility that we will be shown the Xiaomi 12, but it will be positioned as the flagship of 2022. But a specialist from the DSCC company, which specializes in displays, said that something interesting will be shown by the end of 2021, we are talkibg about foldable smartphones.

He posted a list of devices with adaptive 120-hertz OLED displays with an indication of their release time. It is noteworthy that foldable smartphones from Google, Vivo, Xiaomi and Oppo are among the premieres of the fourth quarter of 2021, and there is also a possibility that the Samsung W22 5G will offer a foldable design, but whether it will have a flexible display remains a guess.

It is expected to see Xiaomi 12 on this list, and the surprise is that it contains the Huawei Mate 50 Pro, which is hard to believe in the possibility of its appearance in the fourth quarter of this year. The list of devices also includes the Samsung Galaxy Note 20 Ultra, which, as you know, has been canceled. This error casts doubt on the fact that other information is also correct. Perhaps the whole point is that the list was compiled at the beginning of this year and then Samsung had not yet decided on the release of an update within the Galaxy Note series. Nor was there any certainty that the Mate 50 Pro would be delayed.

Foldable smartphones from Google, Vivo, Xiaomi and Oppo may arrive in Q4 2021 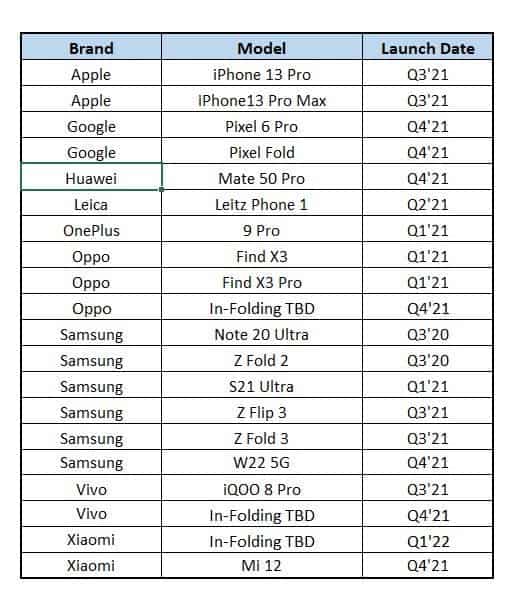 . “With a significant price drop, improved design, and appearance; Samsung is likely to target younger customers with the new foldable Flip smartphone. The new Galaxy Z models will get S Pen support too; which can help absorb existing Note users,” said Senior Analyst Jene Park, who leads the foldables research at Counterpoint.

Previous Apple announces the battery capacity of the iPhone 13 series

Next Apple A16 Bionic processor first exposure: gets significant changes