iQOO has just revealed the iQOO 8 series with cutting-edge specs such as the Snapdragon 888+. Now, the company is moving to bring a new mid-range smartphone that still carries the entire pedigree from the hardware-focused brand. On September 23, iQOO will unleash its iQOO Z5 in China with a decent set of upgrades over the iQOO Z3. The device will eventually hit other countries like India, and recent reports suggest that will happen before the end of September. That certainly will be much faster than the iQOO Z3 which took over two months to launch in the International market. Interestingly, the Z3 also started its global campaign with India.

According to the latest report, the iQOO Z5 will come with a price under INR 30,000 ($410 / €345). The device comes with a decent price, especially for those who are looking for performance and gaming at this price range. It will rival other smartphones with the Qualcomm Snapdragon 778G, but still has some advantages over common mid-range phones.

In addition to the leaks that are popping out, iQOO is continuously publishing teasers to build hype for the event. Recently, the company confirmed that the device will have a 120 Hz display. Moreover, the device will have a tiny punch-hole for the selfie snapper, which is a major change over the waterdrop notch in the Z3. In the same day, the company confirmed stereo speakers with Hi-Res audio are coming with the Z5. As a result, this device will be decent for gaming as well as overall multimedia consumption. Now, the company with another detail that makes this device solid for those who want to extract a lot in a single day. 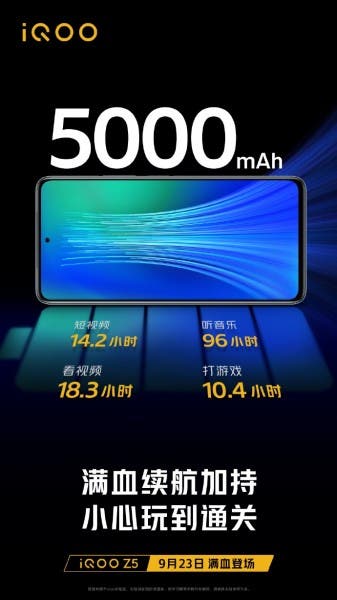 iQOO has just announced that the device will draw its powers from a 5,000 mAh battery. That’s a 600 mAh upgrade over the iQOO Z3 cell and can offer 96 hours of music playback, 18.3 hours of video playback, and 10.4 hours of gaming. The company previously confirmed that the device will have the Snapdragon 778G SoC, LPDDR5 RAM, and UFS 3.1 storage. Furthermore, we don’t need confirmation to know it will come with Android 11. It will be Origin OS 1.0 in China, but Global and Indian versions will let it with Funtouch OS 12. We certainly expect the device to benefit from the virtual RAM feature and come with other gaming enhancements.

There are still a few days to come before September 23 event. We expect iQOO to keep building up the hype for the upcoming handset.