Often on the net, you will see reviews of those who complain that there are almost no compact smartphones left. Today, the dominance of phablets, which are not convenient to take for a run, is difficult to operate with one hand. It seems that Samsung will try to please users suffering from this problem with its Galaxy S22. The famous network insider Ice Universe declares that the device is being created with an emphasis on compactness.

According to the insider, the Galaxy S22 will receive a display with a diagonal of 6.06 inches and an aspect ratio of 19.3:9, but the smartphone itself will be smaller than the iPhone 13 Pro, both diagonally and in width. The useful area of ​​the display will increase by “cutting” the frames around the perimeter. The smartphone will not be thick either, and the necessary refinement will be achieved by reducing the battery capacity. Thus, the Galaxy S22 should receive a 3700 mAh battery versus 4000 mAh from its predecessor.

Ice Universe also began to praise the new product, saying that if users only see the Galaxy S22, they are unlikely to want some other smartphone. It is unlikely that everyone will fall under the spell of the device, especially considering that it will not be cheap.

Recall that according to those rumors that appeared on the network, the Galaxy S22 should offer 22W charging, a Super AMOLED display with a 120Hz refresh rate and a triple rear camera 50MP + 12MP (shirik) + 12MP (telephoto). 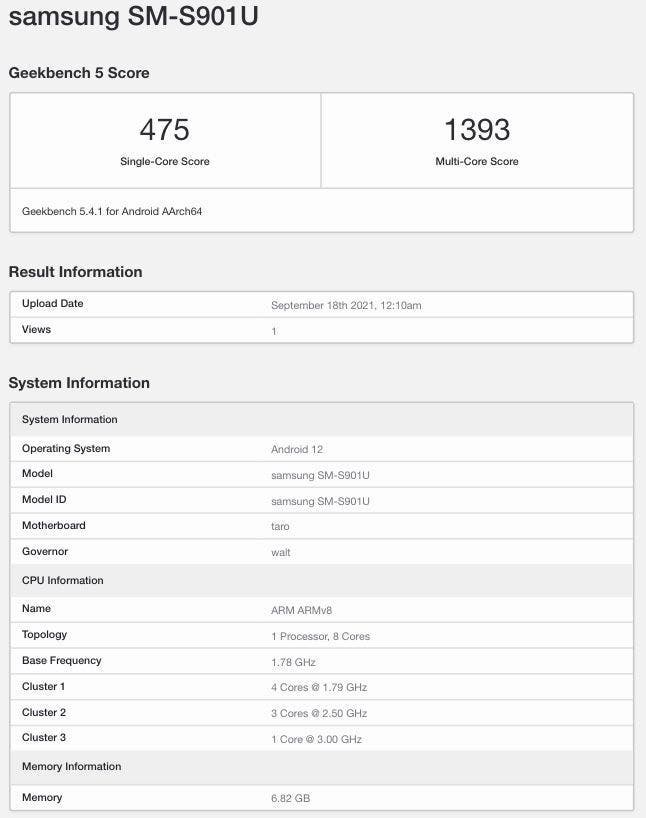 The benchmark reveals the configuration of the cores – they are divided into three clusters with different performance. So, the frequency of the quad-core unit is 1.79 GHz. Another node combines three cores with a frequency of up to 2.5 GHz. Finally, the remaining powerful core operates at 3.0 GHz.

The tested device was equipped with 8 GB of RAM, but other options will certainly enter the market. The operating system is Android 12.

Meanwhile, reports have surfaced that the Galaxy S22 may turn out to be one of the smallest flagship smartphones on the market. In terms of length, width and height, the Galaxy S22 will allegedly be smaller than the iPhone 13; which measures 146.7 x 71.5 x 7.65 mm. The new Samsung will have of a battery with a capacity of 3700 mAh.

The official presentation of smartphones of the Galaxy S22 family is expected in the first quarter of next year.