The International Data Corporation (IDC) has released a fresh forecast for the global semiconductor market, which is currently experiencing difficult times due to shortages.

Note that, despite the ongoing pandemic, the demand for semiconductor products remains stable. This year, the market is growing primarily due to products such as mobile phones, laptops, servers, car electronics, smart home devices, gaming systems, wearable electronics and Wi-Fi hotspots.

In the 5G segment, revenue is forecast to rise 128% this year, while the mobile semiconductor sector as a whole will rise by 28.5%.

The segments of game consoles, smart home devices and wearable gadgets are expected to grow by 34%, 20% and 21%, respectively. Automotive electronics will bring 22.8% more revenue than a year earlier. In the laptop sector, sales will increase by 11.8%, and in the x86 server segment – by 24.6%. 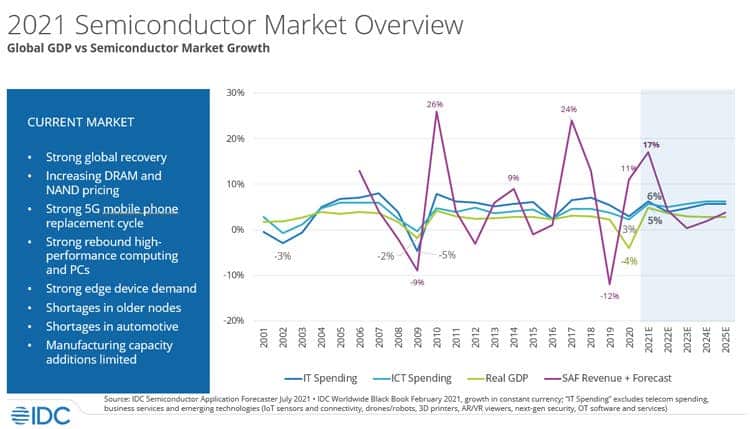 The problem of the shortage of semiconductor products, analysts believe, will be eliminated by mid-2022. And in 2023, according to IDC, there may even be overproduction.

Semiconductor wafer prices increased in 1H21 and IDC expects increases to continue for the rest of 2021; due to material costs and opportunity cost in mature process technologies.

Overall, IDC predicts the semiconductor market to reach $600 billion by 2025; representing a CAGR of 5.3% through the forecast period. This is higher than the typical 3-4% mature growth seen historically.

Next News for the upcoming Apple iPad Pro, AirPods, Mac and more

New US & European regulations will affect the semiconductor industry