The Redmi K40 series was very impressive and its sales were quite massive. Due to the performance of the Redmi K40 series, everyone is looking forward to the arrival of its successor, the Redmi K50 series. There have been a couple of speculations regarding the Redmi K50 series. However, the latest report is on the Redmi K50 Pro which appeared on the MIUI code. According to the report, this smartphone will come with the SM8450 platform (Snapdragon 898 processor). Furthermore, the main camera is a 64MP OV64B, supplemented by ultra-wide-angle and macro lenses. 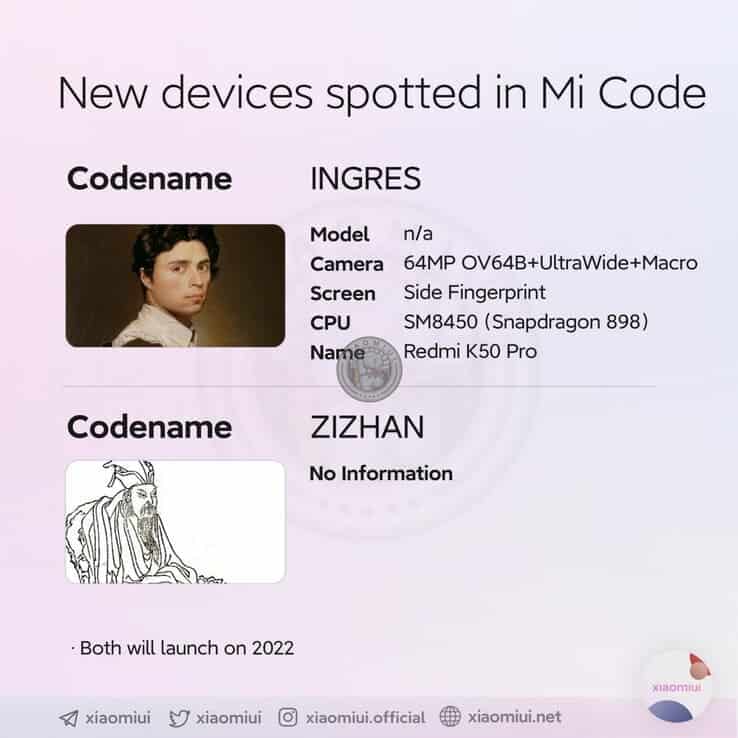 Also, the Redmi K50 series will have a side fingerprint sensor. More interestingly, the code name of Redmi K50 Pro is “Ingres”. According to some checks, “Ingres” is a French neoclassical painter. His representative works are “Spring”, “Lady of the Grand Palace”, “Hammam”, “Wapinson’s Bathing Girl”, etc.

In addition, the code also unearthed a new Xiaomi smartphone code-named “Zizhan” (Su Dongpo, a great writer in the Northern Chinese Song Dynasty). However, there is no specific information on this smartphone.

Qualcomm will officially release the Snapdragon 898 at the end of the year. If any Xiaomi smartphone will use this chip this year, it will be the Xiaomi Mi 12. Thus, we expect the Redmi K50 series to arrive sometime in early 2022.

Earlier, there were reports on the engineering model of the Redmi K50 series. According to the leak, this smartphone series will come with Samsung’s latest-generation E5 OLED high refresh rate screen. Of course, this display will significantly increase the display effect.

In addition, the Redmi K50 will also come with 100W fast charging. However, there are reports that the charging capacity could be as high as 120W. This is the first time that a Redmi model will support up to 100W fast charging. We expect this feature to further increase its experience and cost performance.