MarQ M3 Smart smartphone has launched in India, carrying an affordable price tag and sufficiently good specifications. Flipkart has taken the wraps off its new MarQ M3 Smart mobile phone. The affordable smartphone is likely to attract budget-conscious buyers in India. Flipkart is considered one of the leading eCommerce websites in the country. The brand currently offers feature phones, ACs, refrigerators, and even televisions.

However, the MarQ M3 Smart is the brand’s first-ever smartphone to run Android OS. Earlier this week, Flipkart launched a microsite for the smartphone, hinting at its imminent launch. As expected, the Flipkart listing divulged some key details about the handset before its official unveiling. For instance, it indicated that the phone will sport a 6.1-inch display that offers an HD+ resolution. Aside from that, the listing teased 32GB of built-in storage capacity.

The budget smartphone boasts entry-level specifications that pit it against the likes of the Poco C3, Realme C11 2021, Itel A26, and Infinix Smart 5A smartphones. Considering that it doesn’t cost a bomb, the phone’s specifications are quite decent. The aforesaid teaser poster showed a U-shaped notch and a slightly thicker bottom notch. The phone was tipped to come with two rear-mounted cameras and a robust 5,000mAh battery that powers up the entire system. 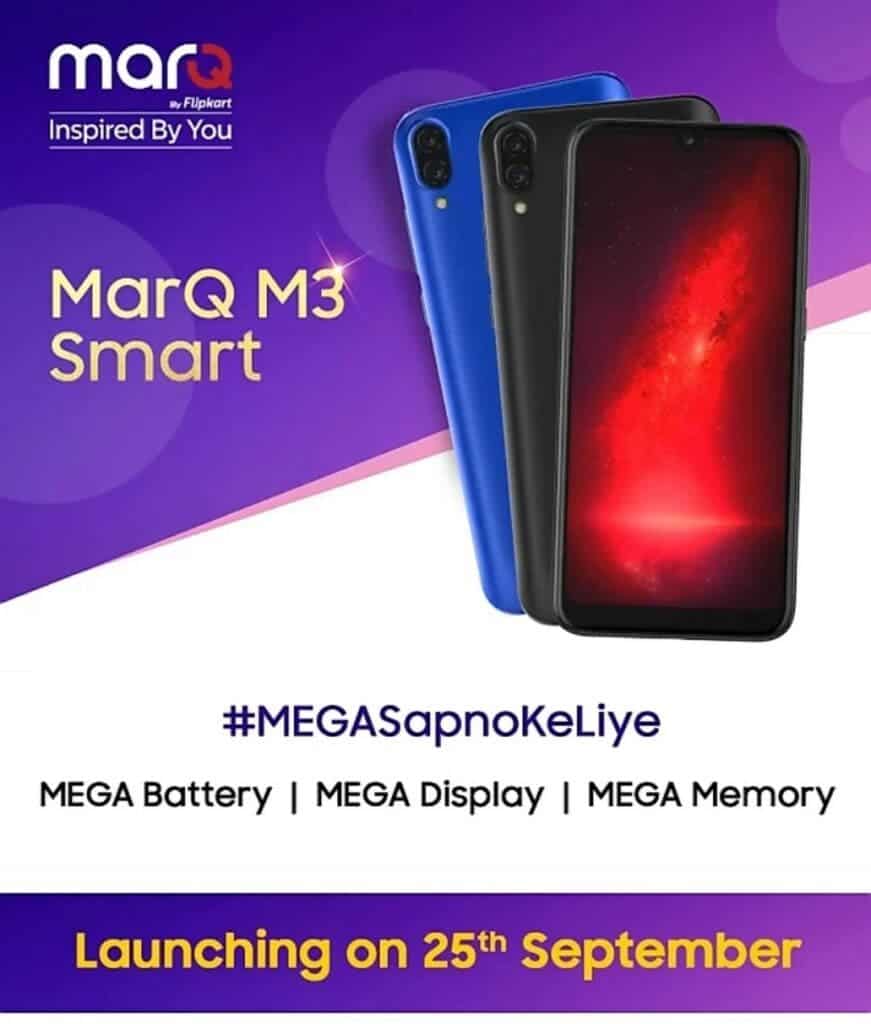 The phone’s original asking price is INR 7,999 (about $108). However, you can get your hands on it for a lowered price of INR 6,299 (about $85) as part of a launch offer. Furthermore, you can choose between two appealing color options including Blue and Black. It will go on sale via Flipkart during the Big Billion Days Sale, which starts on October 7.

Flipkart’s first Android-powered phone has been confirmed to sport a mammoth 6.8-inch display with a waterdrop-style notch, and an HD+ resolution. Furthermore, it sports a 2.5D curved glass. In the optics department, the phone houses two rear-mounted cameras including a 13MP main sensor. Aside from that, the camera module houses an LED flash. Upfront, the phone features a 5MP shooter for selfies and video calling.

Under the hood, the device packs an octa-core processor that clocks at 1.6GHz. Moreover, it will ship with 2GB of RAM and offer 32GB of onboard storage capacity, which can be expanded up to 256GB via a microSD card slot. The phone will come running Android 10 OS out of the box. For connectivity, it offers a 3.5mm jack, GPS, a micro USB port, WiFi, Bluetooth 4.2, 4G VoLTE, and dual-SIM support.

Previous Samsung Galaxy S21 FE Might Have Been Canceled, Here's Why