Apple’s iPhone 13 series recently hit the shelves and its sales have been hot. Although there are some complaints regarding this series, they are not stopping its huge sales.  The iPhone 13 series is only just a few days on the stores, however, there are already reports on the iPhone 14 series. Recent reports show that the internal plan for the iPhone 14 series is ready. Next year, Apple will lay much emphasis on optimization and design improvement. 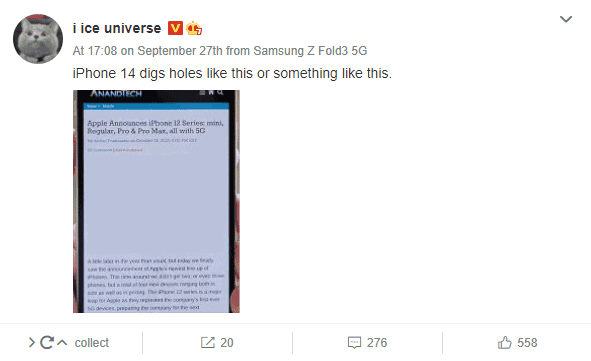 Over the past few days, there have been many rumors regarding the iPhone 14 series. Most of these reports show that the iPhone 14 will ditch the notch design for the first time in four years. The upcoming iPhone 14 series will come with a punch-hole camera design. The latest report from Weibo user @iceuniverse shows an alleged real image of the iPhone 14. As of now, we can not ascertain the authenticity of this image. However, authenticity is not the issue here, the design is.

According to the leak from @iceuniverse, the iPhone 14 will be similar to the solution in the image. Although the notch will be completely expunged, in order to retain the Face ID function, Apple will leave two areas at the top of the screen. While one of the holes has a horizontal pill shape, the other is round. Apple will use these two openings because of the Face ID components as well as the regular front camera.

Read Also:  Here's why Apple is dominating the high-end smartphone segment in China

However, Apple still has enough time to improve this punch-hole scheme. It is also possible that Apple will abandon this “ugly” scheme and bring a more beautiful design. It is worth mentioning that the iPhone 14 series will cut off the mini models. This means that the upcoming iPhones will retain only three models. However, there are reports that there will be a fourth “Max” model. This model will be positioned lower than the Pro model but higher than the regular iPhone. All the iPhone 14 series will probably support a 120Hz high refresh rate and they are worth looking forward to.

Next iPhone 13 Pro camera falls behind Huawei & Xiaomi on DxOMark