Nokia rebooted its journey in the smartphone market with Android smartphones a few years ago. Now, the brand operates under HMD Global and already launched very interesting devices in recent years. However, the company decided to leave the premium segments behind this year to focus in the budget and feature phone segments. Apparently, the company is preparing a new budget offering for the market, and it’s another device with 5G connectivity. The new device will carry Nokia G300 5G moniker.

According to leaked specifications, the Nokia G300 5G will be based on the same Qualcomm Snapdragon 480 5G SoC that was used in the recent Nokia G50 as well as the Nokia X10 and Nokia X20. Besides the Nokia G300 5G, the company is also preparing a new device with the Nokia X100 moniker. The latter device hadn’t its specs revealed, unfortunately.

Worth noting that this isn’t an upgrade over the Nokia G20, but an entirely new smartphone. It isn’t exactly an upgrade as far as cameras and batteries are concerned. However, the device has better performance as the Helio G35 in the G20 is lackluster at this point, and for sure, lacks 5G connectivity.

The Nokia G300 flaunts a 6.57-inch LCD with 1,600 x 720 pixels resolution and a 20:9 aspect ratio. There isn’t anything special to mention here, if this has a toughened glass, it wasn’t mentioned in the leaked materials. Anyway, it is about the same size as the Nokia G20 – 6.52-inch – and smaller than the Nokia G50. However, the latter device stretches the resolution on a 6.82-inch panel which isn’t very enjoyable. 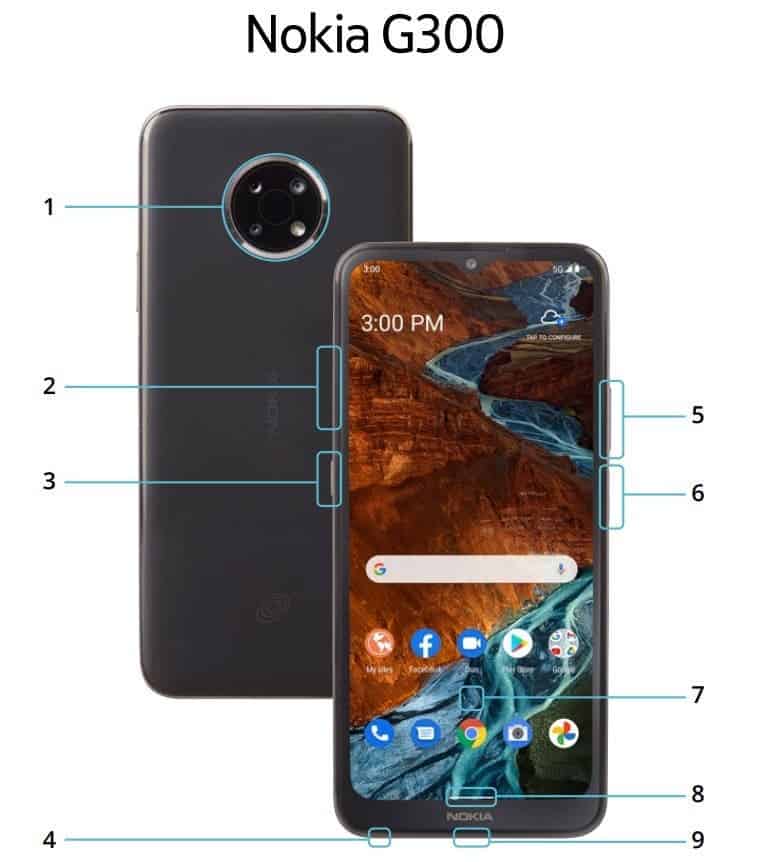 Furthermore, the Nokia G300 5G packs a triple-camera setup. It has a 16 MP primary camera, a 5 MP ultrawide snapper, and a 2 MP depth sensor. It also has an 8 MP selfie camera on the front. The device has a 4,470 mAh battery, but it’s unclear whether the phone will have fast charging or not. It will run Android 11 straight out of the box, which is hardly a surprise right now. The smartphone will have 64 GB of Internal Storage and has a micro SD card slot for more memory.

For now, there aren’t details regarding the price. However, the Nokia G20 was launched for around 160 Euros. Since the Nokia G300 has 5G connectivity it should be priced higher. The device should cost between 160 and 270 Euros. For now, we expect it to go official at HMD’s October 6 even where the company will disclose new smartphones, feature phones, and a new tablet.