Microsoft initially set a very high bar for the computers of potential users of Windows 11. The strict hardware requirements even extend to virtual machines. Meanwhile, the readiness of devices for business users to move to the new OS is not promising.

Based on a study by Lansweeper of about 30 million devices in 60,000 organizations, most PCs cannot be install Windows 11 because they do not meet certain system requirements. The company made the corresponding conclusions in the report “Windows 11 Readiness Audit”.

Additional data regarding this module has been available separately. Approximately 20% of workstations and about 5% of physical servers lack TPM 2.0. 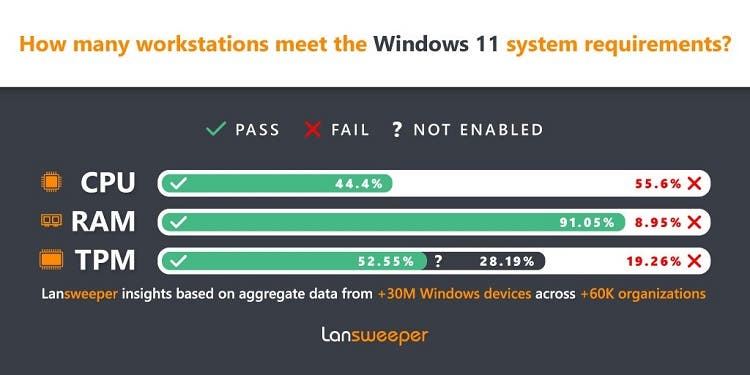 This is not the only analysis carried out in connection with the imminent release of Windows 11. Not long ago, about 1000 PC users were surveyed in the United States. It turned out that most do not know anything about Windows 11; or are simply not interested in the topic, and most do not want to update to the new operating system at all. But according to the company AdDuplex, Windows 11 is already present on 1.3% of computers. 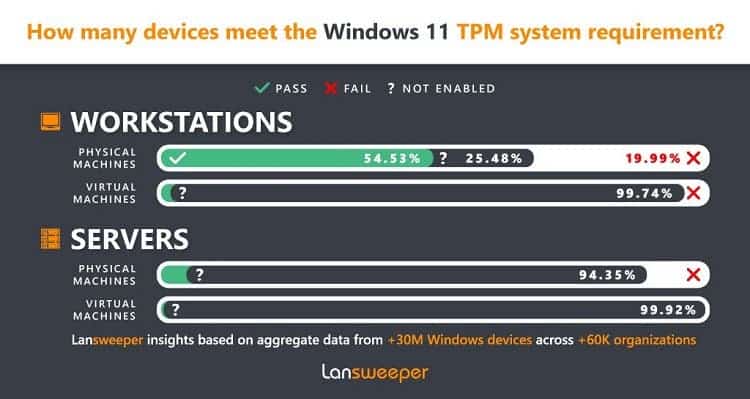 We know that Microsoft is ready to provide support for the new Windows 11 operating system only for computers with certain Intel and AMD processors, the company announces that enthusiasts will be able to install the OS on older PCs – only they will have to be responsible for their performance on their own.

ISO images with the new operating system will be available to users, but older computers will not receive updates. During installation, you will have to accept the terms of the agreement; which states that the computer does not meet the minimum system requirements of the OS; They do not recommend the installation of Windows 11, and will not provide support and updates for these versions of Windows.

The manufacturer’s warranty does not cover any damage due to incompatibility of hardware and software. We do not yet know whether the developer will release updates at all or critical ones can still be obtained.

It should be borne in mind that these conditions, like everything else related to Windows 11, may still change significantly. For example, the minimum hardware requirements already changed at the end of August; so it is possible that the terms of the agreement will change before or even after the release of the new OS.

Previous Xiaomi is preparing a smartphone with a 4K OLED display