Since the launch of the Apple iPhone 13 series, users have reported a number of bugs. These past few days, we have had reports of the Apple Watch unable to unlock the iPhone, the card shows no SIM card, lost images, and so on. Now, there is another large-scale bug on this new iPhone. According to widespread reports from Reddit, iPhone 13 series users are complaining that there were serious problems with the touch sensitivity of the screen. The reports claim that the touch sensitivity suddenly malfunctions and there will be no response when users click the display. The good news about this bug is that there is a quick but temporary fix. You just need to restart the smartphone. 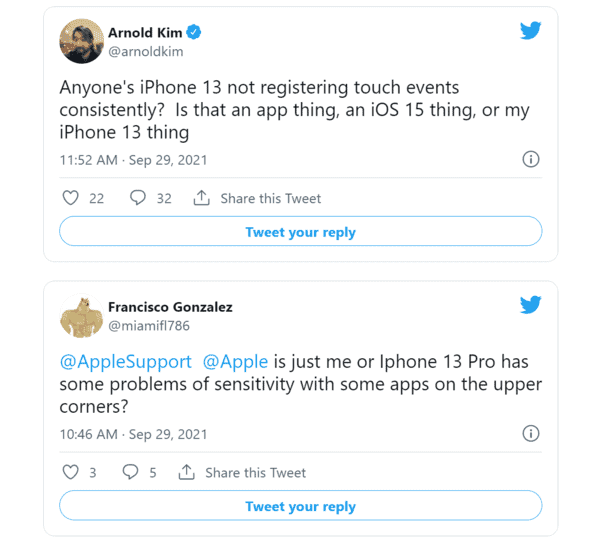 In the past, one click on the screen will give feedback, but now you have to click 4~5 times. This is not a pleasant experience for users. It is worth mentioning that since Apple pushed the official version of iOS 15, there have been many bugs, such as device backup and restore errors, and widget errors. Apple used to be a very rigorous and stable electronic consumer company. Thus, it is quite strange that the company is struggling with so many bugs in its latest system.

As we all know, the price of Apple’s iPhones is high, users need a good experience for their money. Considering the frequent malicious bugs that lead to a decline in user experience, Apple needs to give users a statement. As consumers, there are reasons to pressure Apple to resolve these bugs as soon as possible.

Xiaomi has been under fire for having so many bugs on its MIUI system. Many Chinese manufacturers will suffer a serious public relations crisis if they have frequent bugs in their system. For Apple, smartphone consumers seem to be very tolerant. However, the company need not take advantage of the trust that users have in Apple.