Analysts at Counterpoint Research have studied the mobile processor market in the second quarter of this year and have come to the conclusion that MediaTek has firmly established itself as the leader. And this result turned out to be a record for the Taiwanese chipmaker. For the first time in its history, it controls over 40% of the mobile chip market.

The experts concluded that the share of MediaTek accounts for 43% of the processor market, while a quarter earlier this figure was at the level of 37%. And if you compare with the same period last year, the success of the Taiwanese company looks even more impressive, because a year earlier its share was 26%.

The second place in the second quarter of this year went to Qualcomm, which accounted for 28% of the market for mobile chips and fell 4% year on year. On the third line was Apple, whose share was 14%. This is a similar result of last year, but also 7% less than in the fourth quarter of last year. There is every reason to say that according to the results of the third and fourth decades of this year, Apple will strengthen its position and its share will grow against the background of the start of iPhone 13 sales. 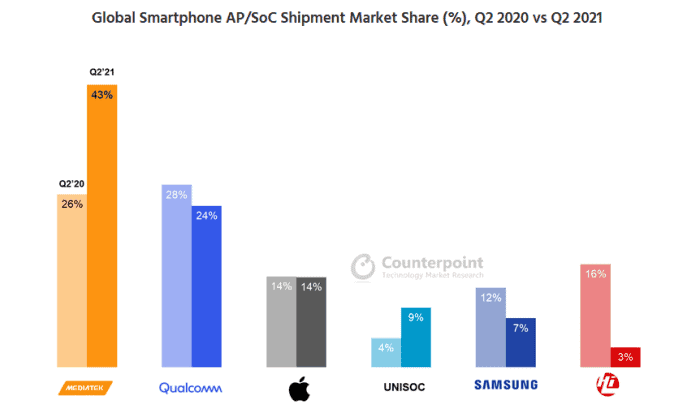 In fourth place was UNISOC with 9% of the market share, which is 5% more than in the second quarter of 2020. Samsung managed to get into the top 5, whose chips accounted for only 7% of the market, while in the second quarter of 2020 this figure was 12%. Predictably, HiSilicon (Huawei) became an outsider, whose share dropped to 3%, and a year earlier it was five times more – 16%.

If we talk about the segment of 5G-chips, then the undisputed leader in the second quarter was the chipmaker Qualcomm. It controls 55% of the market share, up from 29% a year earlier. 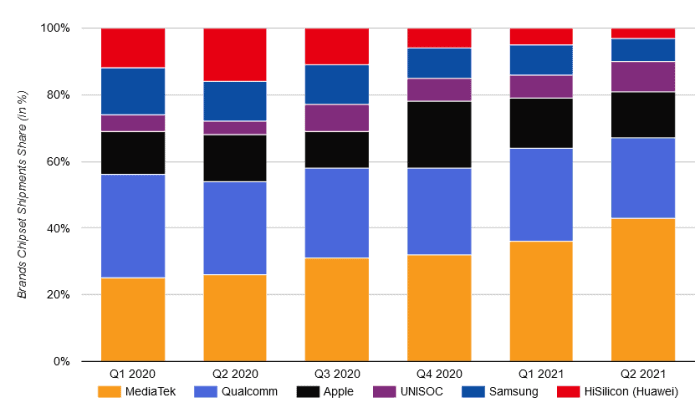 Research Director Dale Gai said, “MediaTek dominated the smartphone SoC market with its highest ever share of 43%, driven by a competitive 5G portfolio in the low-mid segment and without major supply constraints. Relative to Qualcomm, MediaTek benefited from less supply constraints in the first half of 2021, including with RFICs (radio-frequency integrated circuits), power management ICs (PMIC), and stable production yields from TSMC. 4G SoC shipments further helped MediaTek to strengthen its leading position.”

Commenting on the growth of 5G smartphone baseband shipments, Research Analyst Parv Sharma said; “Qualcomm dominated the 5G baseband market with 55% share. It gained from the 5G baseband modem chipset win in the Apple iPhone 12 series; and the significant demand for its complete 5G SoC chipsets, from the flagship 8 series to affordable 4 series. However, Qualcomm would have shipped more chipsets if the San Diego vendor wouldn’t have been affected by the supply-side constraints and yield issues during the first half of 2021. As a result, Qualcomm diversified and secured extra capacity starting at TSMC and other foundries for various components in late Q2 2021. This should help the vendor streamline its component supply and regain the share lost to MediaTek in the coming quarters.”

Previous Top 10 most powerful smartphones in September according to AnTuTu