AnTuTu is a popular benchmark and Internet resource that regularly publishes test results for various devices. The rating gets updates constantly and it’s time for the monthly top 10 most powerful smartphones. Today we are looking at who was recognized as the most powerful in September and among those available on the Chinese market. 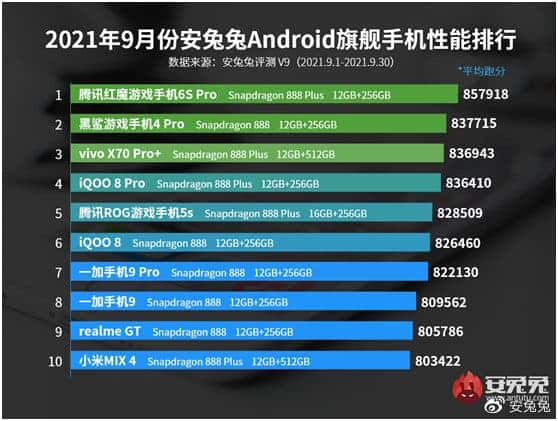 Fourth to tenth places were taken by: iQOO 8 Pro, Asus ROG Phone 5, OnePlus 9 Pro, OnePlus 9, Realme GT and Xiaomi Mi Mix 4 . It came as no surprise that the entire top 10 was occupied by smartphones with Snapdragon 888 and Snapdragon 888+ chipsets. Another thing that unites all participants in the rating is 12 GB of RAM.

Traditionally, the most powerful among the devices of the middle segment is also available. Here, Xiaomi Mi 11 Lite with a Snapdragon 780G processor became the top of the ranking and its result was 532140 points. The second and third positions belong to models built on the basis of Snapdragon 768G – Honor 50 and Honor 50 Pro. The fourth-place went to Oppo Reno6 5G with Dimensity 900 SoC. 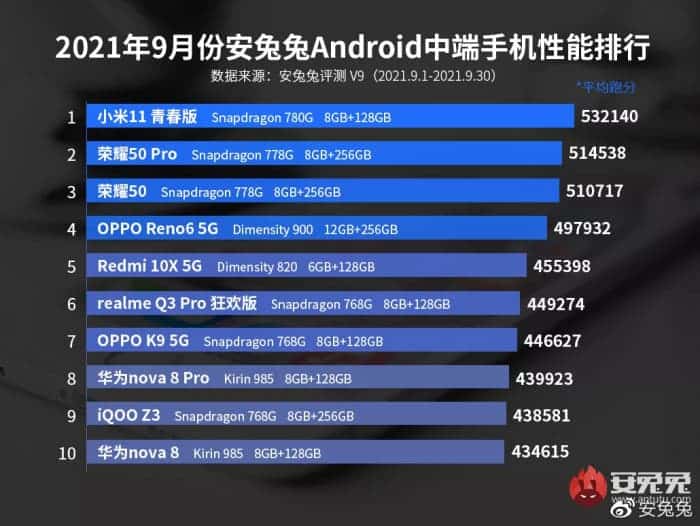 The Redmi 10 X 5G is in the fifth line of the ranking; leaving behind the Realme Q3 Pro and Oppo K9 5G, which have a Snapdragon 768G chip. Huawei Nova 8 Pro managed to get into the top 10, built on the basis of Kirin 985. And the same processor is available in Huawei Nova 8; which closed the top ten most powerful but before it, we have the iQOO Z3 in ninth place.

Last month, AnTuTu released its August smartphone performance ranking. Unexpectedly, despite the launch of smartphones based on Qualcomm Snapdragon 888+; the first line of the rating is occupied by a smartphone with a slightly less powerful Snapdragon 888.

The leader was the gaming flagship Xiaomi Black Shark 4 Pro, based on Snapdragon 888. The device gains 864 614 points in AnTuTu V9. The second place went to iQOO 8 Pro, which is running the latest Snapdragon 888+. The smartphone scored 846 351 points. Experts explain the situation by the fact that AnTuTu tests all smartphone systems as a whole; and the advantage of the Black Shark 4 Pro is due to the use of much faster memory. As far as the pure performance of the chipset is concerned, the iQOO 8 will definitely show the best result.

The best mid-range smartphones to buy in 2022