In the Xiaomi office, there is a reason to open a bottle of champagne and celebrate the new success. Analysts at Strategy Analytics ranked the Chinese company in first place in terms of the number of 5G smartphones delivered to the Central and Eastern European market in the third quarter of this year. Its share was an impressive 41.8% and Xiaomi was only a little short of the fact that every second smartphone sold in Europe bears the company’s logo.

In order to understand what success Xiaomi has achieved in conquering the 5G smartphone segment, let’s say that a year ago the company’s share was 4.3%. Analysts predict that Xiaomi will become a leader in Central and Eastern Europe by the end of 2021. Moreover, no one will be able to push it off the top of the 5G smartphone market in this region in 2022. Experts agree that Xiaomi’s success is not least dictated by the fall of Huawei, as well as the release of models such as the Xiaomi Mi 11 and Redmi Note 9T 5G.

“Silver” was taken by Apple with a share of 26% and thanks to the iPhone 12 line. Top-3 was closed by Samsung, whose share in the third quarter of this year was 11.5% and this is three times less than a year earlier (34.3%). The fourth-place of Realme can be considered a success; which controls 7.9% of the 5G smartphone market in Central and Eastern Europe. For comparison, a year earlier, its share was only 0.9%. OnePlus is also in the top five; with 5G devices accounting for 2.5% of the market, which is 1.8% less than a year earlier. 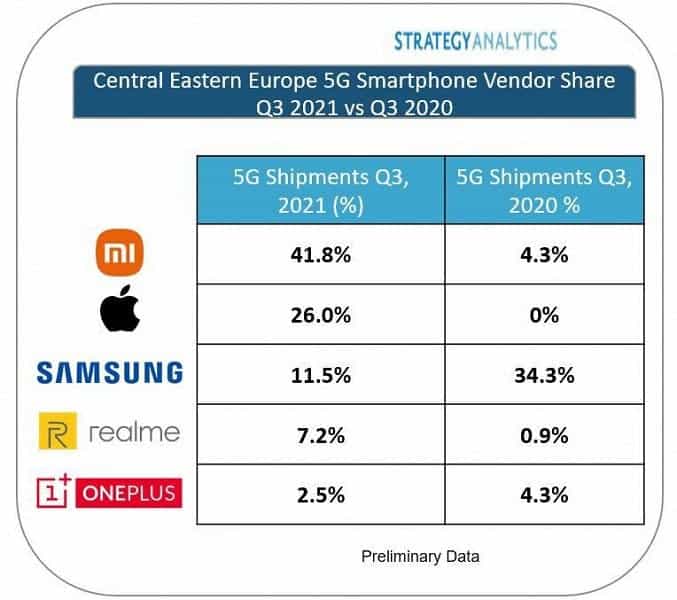 “Xiaomi is expected to maintain its lead in Central and Eastern Europe region for the full-year 2021; and remain the 5G smartphone shipment leader in 2022,” says Yiwen Wu, Senior Analyst at Strategy Analytics. “Xiaomi is capitalizing on the absence of Huawei; as well as its own portfolio of high-quality affordable 5G smartphones; such as the Redmi Note 9T 5G and Mi 11 5G.”