Samsung has revolutionized its smartphones with the arrival of the Galaxy A-series. The company brought some specifications that could be only found in Galaxy flagships to the mid-range segment. In fact, the lineup helped Samsung to compete against the Chinese brands after years of falling behind with tepid and boring Galaxy low-end and mid-range smartphones. The lineup starts with the Galaxy A10 series which usually brings modest smartphones at an affordable price tag. Earlier this year, the company unleashed the Galaxy A12, now it seems to be preparing the Galaxy A13 to keep up the lineup.

The Galaxy A13 5G already had some of its specifications leaked before. The device will come with a primary 50 MP camera and will also draw its powers from a 5,000 mAh battery. Now, the very same device has been spotted at the Geekbench benchmark with the SM-A136U model number. Thanks to the listing, we already know some of the specifications that the handset will bring and what to expect in terms of performance.

The scorecard reveals the Galaxy A13 5G scored 465 single-core points and 1,106 points in the multi-core department. Under the hood, the ARM MT6833V turns out to be the MediaTek Dimensity 700 SoC. This chip is already found on some Galaxy A-series mid-range smartphones like the Galaxy A22 5G. Apparently, the company will be bringing this SoC one step below in terms of pricing. The A22 5G sits as the company’s most affordable 5G smartphone. However, we assume that it will soon be replaced by the A13 5G. 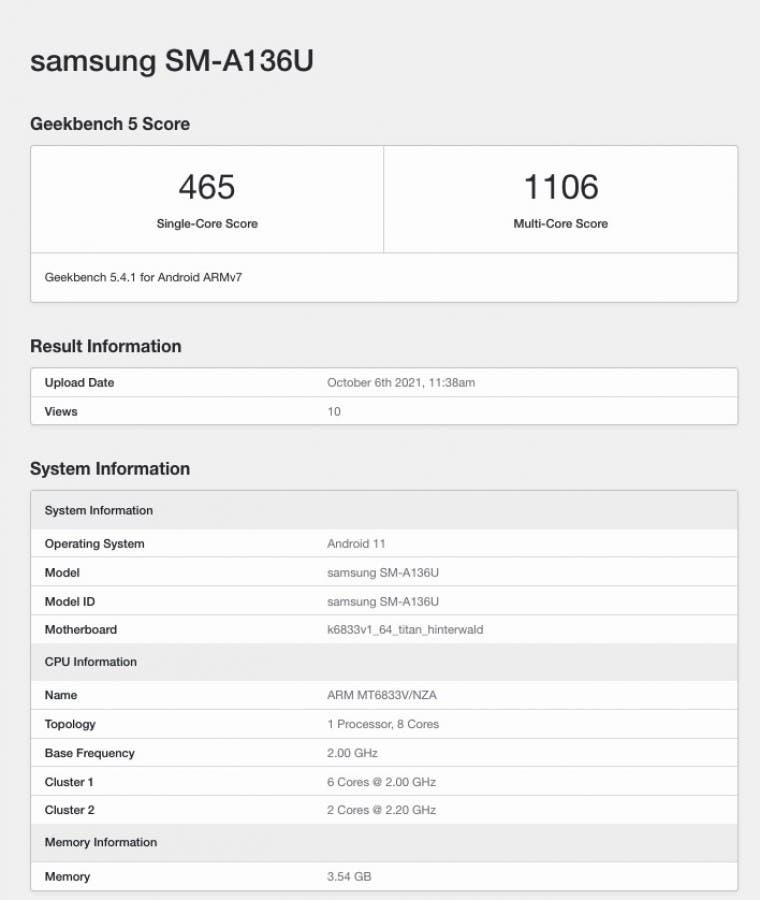 In addition to the Dimensity 700, the smartphone also runs with 4 GB of RAM and boots Android 11 straight out of the box. The software part is hardly a surprise. However, the company is still working on the Android 12-based One UI 4.0, and the first devices to come with it will be part of the Galaxy S22 series. The variant spotted at Geekbench with 4 GB of RAM will likely be paired with 64 GB of Internal Storage. However, we can’t discard the possibility of a 128 GB variant.

We expect the A13 5G to have a large LCD screen with at least HD+ resolution. In terms of cameras, it may come with multiple cameras. However, it will be led by a Samsung ISOCELL JN1 50 MP camera.

For now, the Galaxy A13 5G is expected to debut early in 2022. We may see more leaks in the upcoming months.

Next Google Pixel 6 Pricing Revealed via Leaked Advert, May Retail for €649