A new green color variant of the Realme Buds Air 2 will launch in India later this month, but the company has already started teasing it. The Buds Air 2 true wireless earbuds offer active noise cancellation without burning a hole in your pocket. The earbuds hit the store shelves in India in March 2021. Now, the well-received TWS is set to receive a new colorway for the Indian market.

Realme Buds Air 2 Gets A New Green Colour In India

Realme is gearing up to introduce a new Green color variant of its Buds Air 2, much to the delight of its huge fanbase in India. Aside from that, the company will be taking the wraps off the Realme GT Neo2 smartphone on October 13. The Realme Bus Air 2 is currently up for grabs in three color options. This includes Closer Gold, Closer Black, and Closer White. However, the earbuds will get a fourth color option that matches the Realme GT Neo2 smartphone’s green color theme.

The #realmeBudsAir2 are all set to take you to another dimension with their New Green colour.

Are you excited to turn the #NoiseOffrealmeOn in style?

The Green paint job will be limited to the stick. In other words, the part that goes inside the ear will still sport a black paint job. Nevertheless, the outside of the Buds Air 2’s charging case will sport the same eye-catching green color. The interior of the charging case will be black. Following in the footsteps of previously launched variants, the green-tinted Buds Air 2 will have the branding on the front.

The feature-laden Realme Buds Air 2 comes with ANC (Active Noise Cancellation) support. It delivers ANC of up to 25dB and monitors external noise using its feed-forward microphone. As a result, the earbuds can emit reverse anti-noise sound that cancels external noise, according to a report from TheMobileIndian. Furthermore, the earbuds pack the company’s own R2 chipset under the hood. 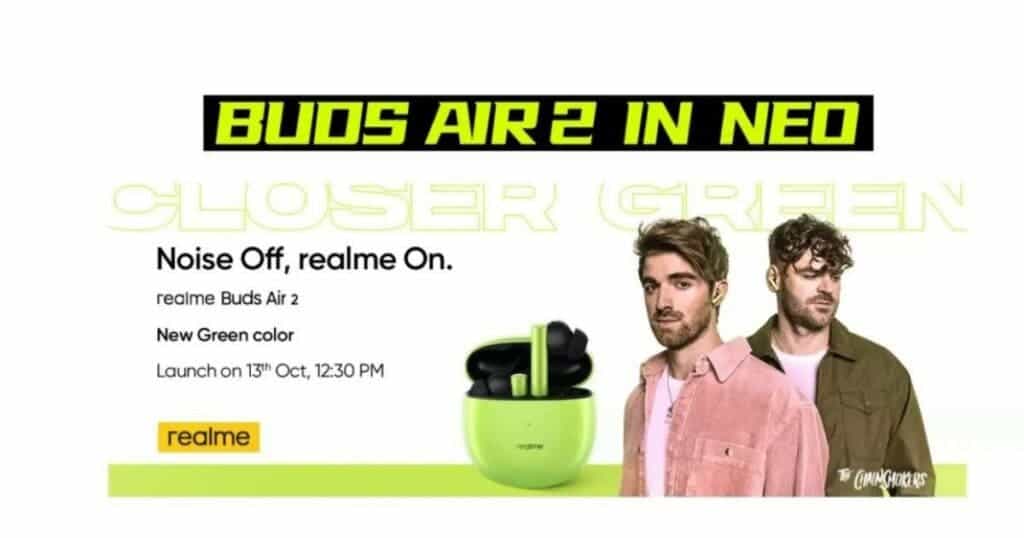 On top of that, the Realme Buds Air 2 uses a 10mm diamond-class Hi-Fi driver for a superior listening experience. For wireless connectivity, the device comes with Bluetooth 5.2 support. On top of that, it has ENC for transparency mode and calls. According to Realme, the Buds Air 2’s battery delivers up to 5 hours of battery life on just a single charge. Moreover, the battery can last up o 25 hours with the charging case.

The earbuds support Type-C fast charging and deliver a playback of 2 hours even if they are charged for 10 minutes. Aside from that, the audio delivered by these earbuds has been put together in collaboration with The Chainsmokers. The Realme Link app offers various customization options such as Bass Boost+, Clear, and Lively music modes. You can currently purchase the Realme Buds Air 2 for a lowered price of INR 2,499 from Flipkart.

Previous OnePlus 9RT To Launch In China On Oct. 13, India Launch Not Confirmed