Samsung has just certified the Chinese variants of the Samsung Galaxy S22 smartphones at China’s 3C. The Chinese authority has certified the devices with support for 25 W charging. With this in mind, our biggest fears are now true. For another year, Samsung will stick with 25 W charging on its flagship series. Despite the previous rumors, not even the high-end Samsung Galaxy S22 Ultra is getting 45W charging. Instead, the most high-end handset will be limited to the mid-range-esque 25W charging.

Apparently, Samsung is not going to pursue the Chinese brands with their crazily fast-charging technologies. If the devices are still selling well with 25 W charging, then, we assume that the company isn’t seeing a reason to change, in the best Apple’s way of thinking. However, there are rumors that these speeds are only applicable to the Qualcomm Snapdragon 898 powered units. The Samsung Galaxy S22 Ultra with Exynos 2200 and the new custom-made GPU by AMD can still get the 45W charging. However, this variant isn’t reaching the United States and China, as a result, it’s not part of 3C papers. 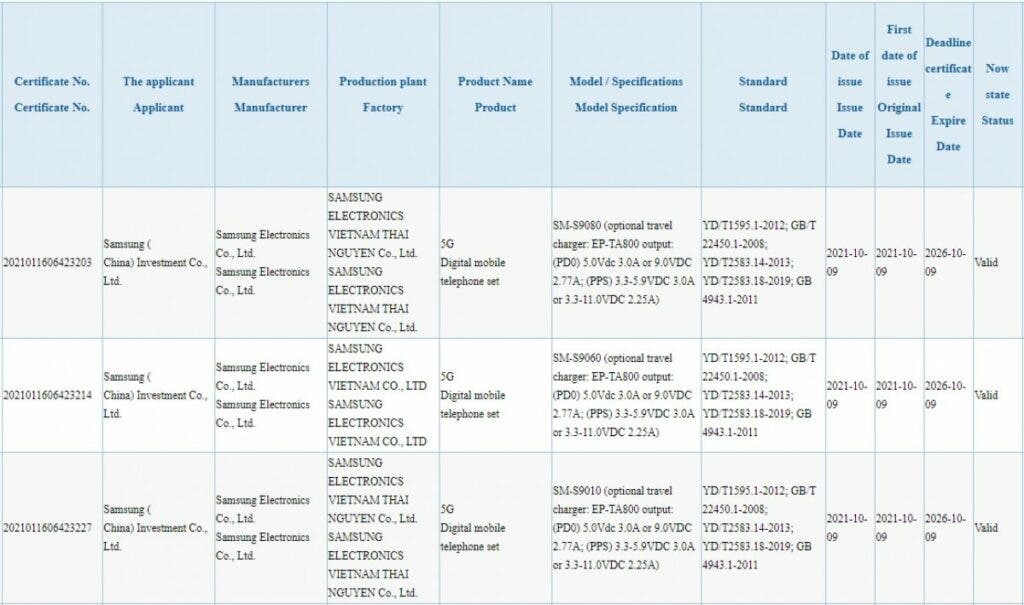 The devices carry SM-S9010, SM-S9060, and SM-S9080 model numbers. These are respectively the Galaxy S22, Galaxy S22+, and the Galaxy S22 Ultra. The last character being a 0 means these are units designated for the Chinese market. All of them will come with the Samsung EP-TA800 25 W adapter that has been part of the Samsung portfolio since the introduction of the Galaxy Note 10 in August 2019.

In 2022, not even 45W fast-charging will be impressive for flagships. For comparison, there are Chinese brands shipping devices with 100 W fast-charging and should reach the 125 W mark by the next year. Also, there are dozen of smartphones in the mid-range market shipping with 33W, 50W, and even 65W fast-charging speeds. The affordable categories are the ones coming with 18W or 25W charging. So it’s a shame to see super-expensive flagships having the same charging speeds as low-end smartphones.

Samsung may fall behind other competitors at least in this particular department. As far as the upgrades are concerned, the new flagships will come with improved cameras. Moreover, they will have Exynos 2200 SoC with RDNA2 Mobile GPU offering Ray-Tracing and Android 12-based One UI 4.0 straight out of the box. The S22 Ultra will be the most notable flagship since it will adopt some of the Galaxy Note features and for the first time will have a slot for housing the S Pen.

Next Huawei Nova 9 and 8i launch set for October 21