Huawei Watch Fit smartwatch will be launching in India during the upcoming festive season in the country, according to a new leak. The Chinese tech company is gearing up to unveil the FreeBuds 4i TWS earbuds in India after launching them in international markets. The truly wireless earbuds offer ANC (Active Noise Cancellation) support, longer battery life, and a host of other awe-inspiring features.

If rumors making the rounds online are anything to go by, Huawei could be planning to launch the Watch Fit along with the FreeBuds 4i in India. The fitness band has gone official in China and a slew of other international markets. Regrettably, details about the Huawei Watch Fit smartwatch launch in India are still scarce. However, a recently surfaced leak has teased an expected launch timeline of the wearable.

The Chinese smartphone manufacturer will reportedly bring its Watch Fit smartwatch into the Indian market. According to the aforesaid leak, the wearable could be official in the country before Diwali. This five-day-long festival of lights will start on November 4. In other words, the Huawei Watch Fit could launch in India before November 4 this year. This piece of information comes from noted leaker Abhishek Yadav. Taking to his Twitter account on October 13, Yadav shared some key specifications of the Watch Fit.

Aside from that, he stated that the company will launch the Watch Fit in India before Diwali. There is a possibility that Huawei will launch its new wearable during the last week of this month. According to a report from The Times of India, the watch could retail for around INR 10,000 in the country. The wearable sells for AED 399 in the UAE. It is worth mentioning here that Huawei has neither confirmed nor denied these speculations.

The Watch Fit sports a crystal clear 1.64-inch AMOLED screen. This HD screen has a rectangular shape and delivers a resolution of 456 x 280 pixels. Aside from that, it supports slide-and-touch gestures, as well as touchscreen capabilities. Moreover, the international variant is available in various color options. These include a special Gold Elegant Edition, Rose Gold, Black, and Silver. 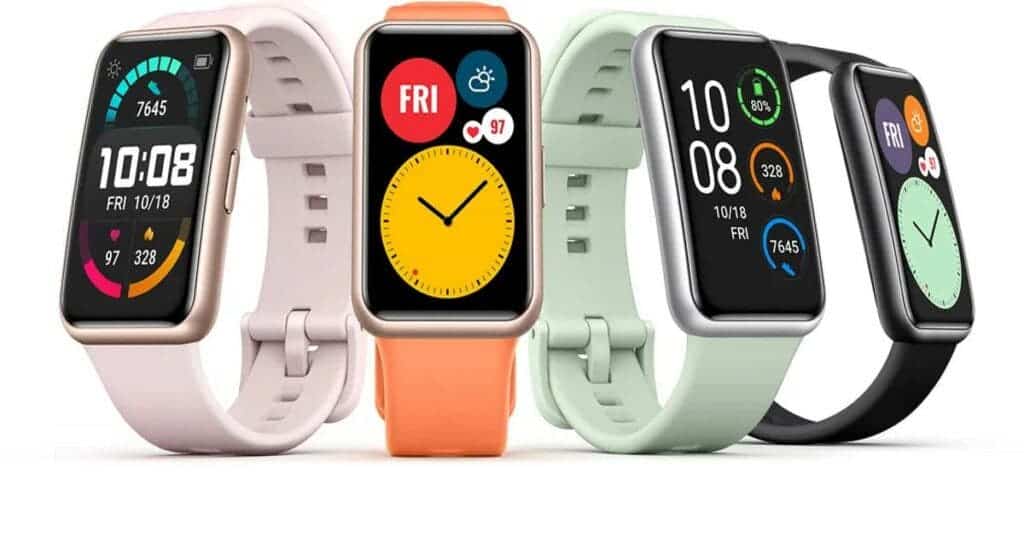 Furthermore, the Watch Fit comes with useful sensors such as an optical heart-rate sensor and a 6-axis IMU sensor. On top of that, the fitness band boasts 98 workout modes along with SpO2 tracking. It will reportedly offer a battery life of up to 10 days on a single charge. Moreover, the wearable carries a 5ATM rating for dust and water resistance. Also, the watch works with Android 6.0 or later and iOS 9.0 or later.