Realme Q3s key specifications have surfaced online via an official teaser poster ahead of the smartphone’s official launch. The much-awaited Realme Q3s is slated to go official in the company’s home country of China later this month. However, the Chinese smartphone manufacturer is leaving no stone unturned in a bid to create more hype around the phone’s imminent launch.

With just a few days left for the launch event, Realme had shared a poster that gives us a glimpse of the Q3s’ color options and the rear panel earlier this week. On October 15, Realme shared another poster on its official Weibo account. The recently shared poster showcases the phone’s front design. Moreover, the image divulges some vital information about the smartphone’s display.

According to the company, the Realme Q3s will be a modified version of the regular Realme Q3 smartphone. Furthermore, Realme has confirmed that the phone will hit the store shelves in China on October 19 launch event. The company will be taking the wraps off the equally anticipated Realme, GT Neo2T, at the same launch event. Now, before its official unveiling, Realme Q3s specifications have surfaced on the web. 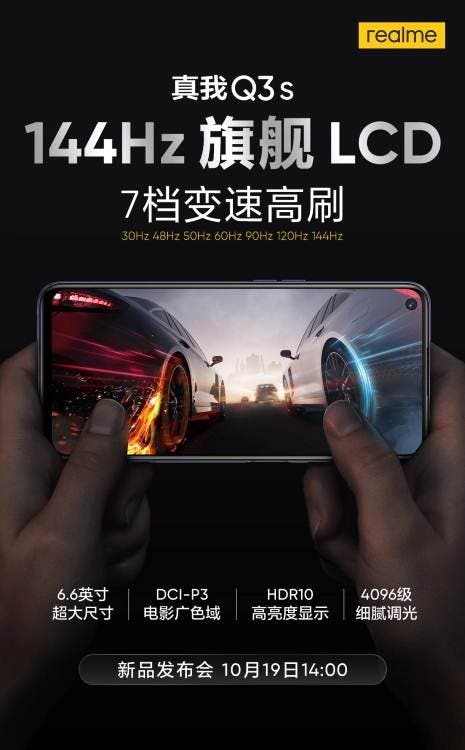 Aside from that, a new teaser image has given us a clearer view of the phone’s front design. Upfront, the phone seems to feature a punch-hole cutout at the top left corner. This will accommodate the handset’s front shooter. Aside from that, the Q3s seem to sport slim bezels. The left edge houses the volume rocker. The power button is available on the right spine. The power button also serves as a fingerprint sensor.

If rumors making the rounds online are anything to go by, the Realme Q3s will feature a 6.6-inch LCD display with a high refresh rate of 144Hz. Moreover, the display can automatically toggle between 144Hz, 120Hz, 90Hz, 60Hz, 50Hz, 48Hz, and 30Hz based on the content. Aside from that, the phone delivers 4096 brightness adjustment levels, HDR10, and DCI-P3 color gamut. The fingerprint sensor is available on the side for easy accessibility.

Realme China CMO Xu Qi Chase shared an image of the upcoming smartphone on Weibo. The aforesaid image showcases the rear panel design. The phone will house a triple camera module at the back. This rectangular module will also house an LED flash. This implies that the Q3s will come with a 48MP main camera. A Realme phone carrying model number RMX3461 passed through the TENAA certification website recently. 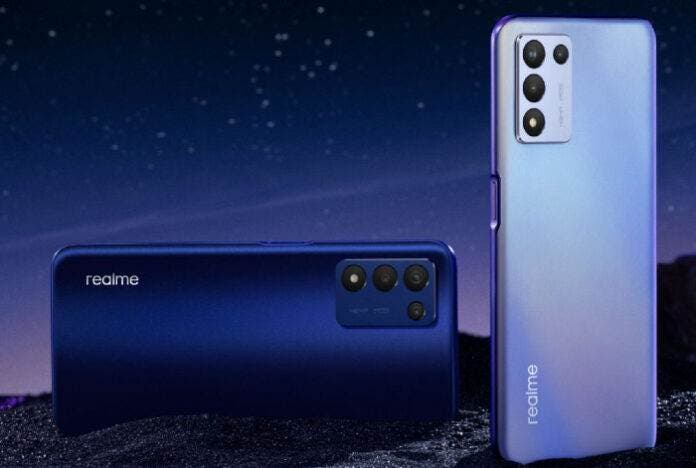 The Realme RMX3461 could launch in China with the Realme Q3s moniker. Under the hood, the phone packs a 2.4GHz octa-core processor. According to a report from GSM Arena, this could be Snapdragon 778G chipset. The TENAA listing has revealed the full specifications of the handset. The phone will ship with 12GB, 8GB, and 6GB of LPDDR4X RAM. Aside from that, it could offer 512GB, 256GB, and 12GB of UFS 2.1 expandable storage capacity.

The phone will probably run Realme 2.0-based Android 11 OS. For optics, it could house two 2MP cameras for depth and macro. Upfront, the phone is likely to come with a 16MP shooter for selfies and video calling. It measures 164.4×75.8×8.5mm and weighs just 199 grams. The Q3s could draw its juices from a 5,000mAh battery.