As expected, the recently surfaced image of the Realme Q3s smartphone’s retail box gives us a glimpse of the price tag it could be carrying. The Q3s will be Realme’s latest mid-range offering. Furthermore, the phone will sport an LCD display that offers VPR (variable refresh rate) of up to 144Hz. On top of that, the phone will support HDR10. Moreover, the phone has been subject to several leaks and speculations in the past.

Taking to his Twitter account on October 18, noted leaker Mukul Sharma (@stufflistings) shared an image of the retail box of the Realme Q3s. In his tweet, Sharma suggested that the upcoming handset will retail for CNY 1,999 (about INR 23,400).

It is worth mentioning here that the Realme Q series smartphones have not been launched outside China and India so far. However, there is a possibility that the company could announce another device with the same specs and a different moniker for other regions. In other words, the Realme Q3s will be launched specifically in China today (October 19).

As mentioned, the Realme Q3s could go official in other regions, including India, bearing a different name. Nothing is set in stone yet, as far as the India launch is concerned. However, a leaked official teaser poster divulged key specifications of the Realme Q3s smartphone. The device could feature a Qualcomm Snapdragon 778G 5G SoC under the hood. Furthermore, it is likely to ship with 8GB of RAM and offer 256GB of onboard storage capacity. 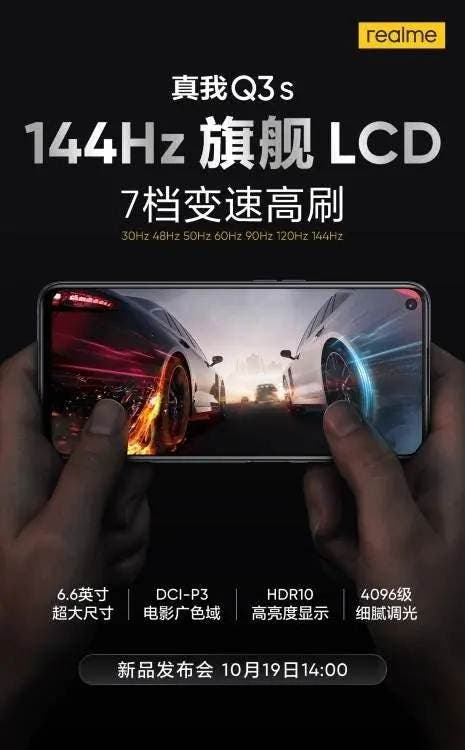 Aside from that, the Q3s will sport an LCD display that delivers a high refresh rate of 144Hz, according to a report from MySmartPrice. In fact, the Q3s are likely to allow users to choose between 144Hz, 120Hz, 90Hz, 60Hz, 50Hz, 48Hz, and 30Hz refresh rate options. On top of that, the display will come with a DCI-P3 movie-wide color gamut option. The phone will support HDR10 with a fine dimming of 4,096 levels. A Realme phone with model number RMX3461/ RMX3463 was spotted on TENAA earlier this month.

The word on the street is that the aforesaid phone will launch as the Realme Q3s. The TENAA listing suggests that the device will come with a 6.59-inch LTPS display with Full-HD+ (1,080×2,412 pixels) resolution. Aside from that, it will ship with 12GB of RAM and offer 512GB of built-in storage. The TENAA listing also indicated that the device will have a 48MP main camera, and two 2MP sensors at the back. The Realme RMX3461 is likely to feature a 4,880mAh battery and has a side-mounted fingerprint scanner.

Realme Q3s Specifications Teased Ahead Of Launch Via A Teaser Image