The Vivo Y3s has gone official in India, revealing the smartphone’s sufficiently good specifications and reasonable price tag. The newly launched budget offering has been introduced under the Chinese tech company’s well-received Y Series. Moreover, the smartphone boasts an impressive array of features and a highly appealing outward appearance.

The most notable feature of the Y3s is its robust battery with reverse charging support. Aside from launching Vivo Y3s in India, the company has unveiled the Vivo S10e smartphone in China. The S10e features a 6.4-inch AMOLED display and packs MediaTek’s Dimensity 900 SoC. Aside from that, it houses three rear-mounted cameras. Moreover, the Vivo S10e runs Android 11 out of the box with OriginOS on top.

The recently unveiled Vivo Y3s sports a 6.51-inch LCD with an HD+ resolution, and a waterdrop-style notch that accommodates the selfie camera. Under the hood, the phone packs an Helio P35 SoC from MediaTek. Moreover, the phone ships with 2GB of RAM and offers 32GB of built-in storage capacity. You can expand the onboard storage up to 1TB via a microSD card. In the optics department, the Vivo Y3s houses a 13MP main camera with an f/2.2 aperture, according to an earlier report. 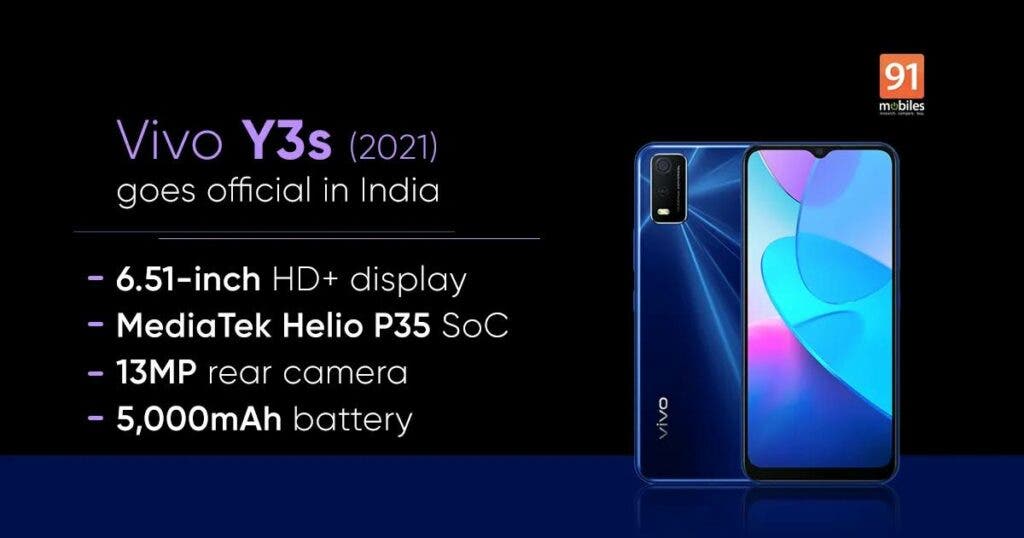 Moreover, there’s an LED flash inside the camera module. Upfront, the phone houses a 5MP shooter for selfies and video calling. The phone draws its juices from a massive 5,000mAh battery. According to Vivo, the battery delivers online HD movie streaming of up to 19 hours and gameplay of 8 hours. For connectivity, the phone features Micro USB, GPS, Bluetooth 5.0, and dual-band Wi-Fi. The Micro USB port comes in handy for data transfer and charging.

Furthermore, the phone comes with reverse charging support. The phone doesn’t come with a fingerprint scanner, but there’s a face unlock. Also, the phone runs Android 11 Go Edition with FunTouch OS 11 atop. Moreover, the Vivo Y3s will be available in three color options, according to a MySmartPrice report. These include Starry Blue, Mint Green, and Pearl White.