Oppo has launched Oppo K9 5G in May this year and completed the lineup last month with the Oppo K9 Pro 5G. However, it seems that the company isn’t ready with this lineup. According to recent leaks, the company has been preparing for the release of a new variant dubbed Oppo K9s. Now, we have the device’s release date set for October 20.

Oppo shared a post on its Weibo’s marketing handle to tease the upcoming smartphone. Interestingly, the poster serves to reveal that the device will stick with the traditional K9’s design. The Rear panel resembles the Oppo K9 Pro and sports a triple-camera system headlined by a 64 MP camera.

Unfortunately, the company is yet to detail the full specs sheet for the handset. However, the Chinese retailer JD.com, went ahead listing most of the smartphone’s specifications.

As per the JD.com listing, the new Oppo K9s will be a premium mid-range smartphone with 5G connectivity. Under the hood, it carries the excellent Qualcomm Snapdragon 778G that has become popular in recent times. This chipset brings ARM Cortex-A78 cores and is based on the cutting-edge 6 nm architecture. It also brings a new Adreno 642L GPU which is much faster than anything else in the SD7xx series. 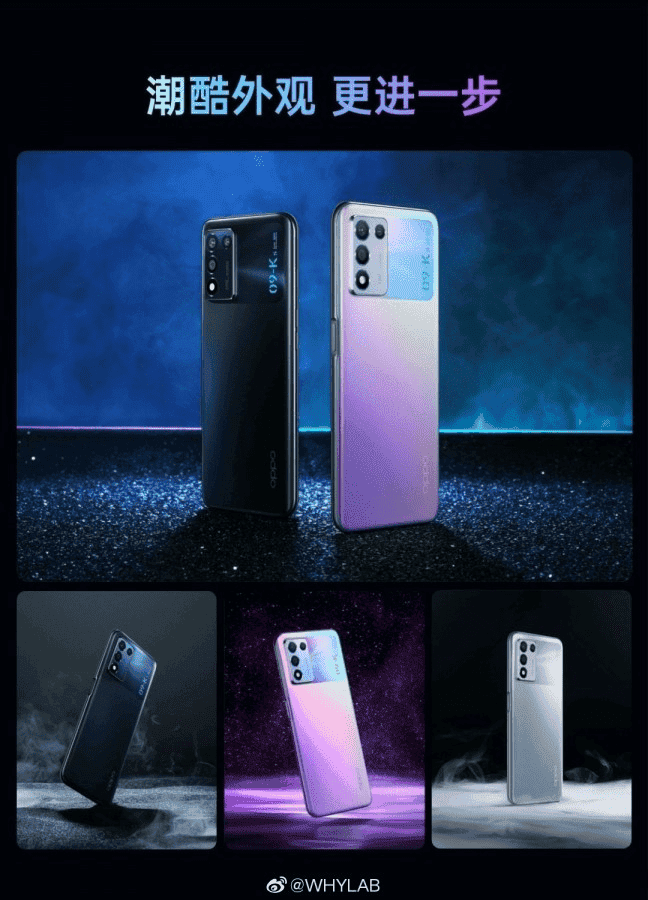 In addition to the top-notch processor, the phone will come in options with 6 GB of RAM and 8 GB of RAM. Apparently, both variants will come with 128 GB of Internal Storage. For now, we don’t know if the device will have some sort of slot for memory expansion. Moving on, the device will have a 120 Hz screen with 6-level refresh rates. Moreover, there will be an X-axis linear motor, 4D vibrations for immersive gaming. The package of specs will come in three distinct colorways.

The screen will come with a 6.59-inch diagonal and will have a Full HD+ resolution. It’s a common LCD in case you’re wondering. As a result, the fingerprint scanner will come in the side and will double as a fingerprint scanner. The selfie snapper users a 16 MP snapper. Moving around to the back, there is a triple-camera setup with a 64 MP main unit. It is joined by an 8 MP ultrawide camera and a 2 MP macro or depth module. The Oppo K9s will have a 3.5 mm headphone jack and a USB Type-C port. The package is fueled by a 5,000 mAh battery with 30W fast-charging support. The device is 8.52 mm thick and weighs in at 199 grams.