According to Canalys experts, the number of smartphones sold in the country fell by 5% in comparison with last year, while the sales volume is still higher than in the second quarter. We expect that in the fourth quarter of the year, interest in electronics will rise again with the onset of the holiday season. 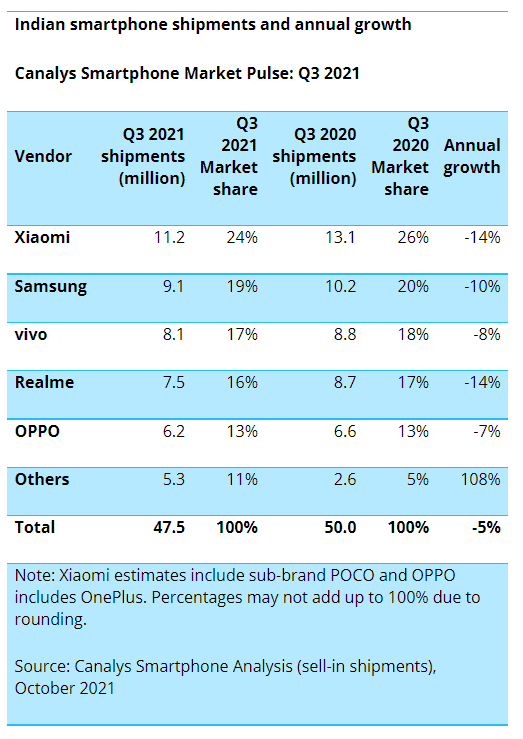 The gap between Samsung and the latter companies is too insignificant for the leadership of the South Korean manufacturer to not worry about possible competition – the company may lose ground in any of the following quarters. While Samsung has managed to narrow the gap between its performance and Xiaomi’s results somewhat, it still has a lot to do in order to regain the leading position that it has lost in the region relatively recently.

It is noteworthy that in other regions, Samsung is also inferior to Xiaomi. At the end of the second quarter, the companies held similar positions in the ranking of smartphone sellers in Russia. Now the situation may worsen due to the ban on selling more than 50 Samsung models in Russia in connection with a patent dispute over Samsung Pay, although the court’s decision has not yet entered into force. 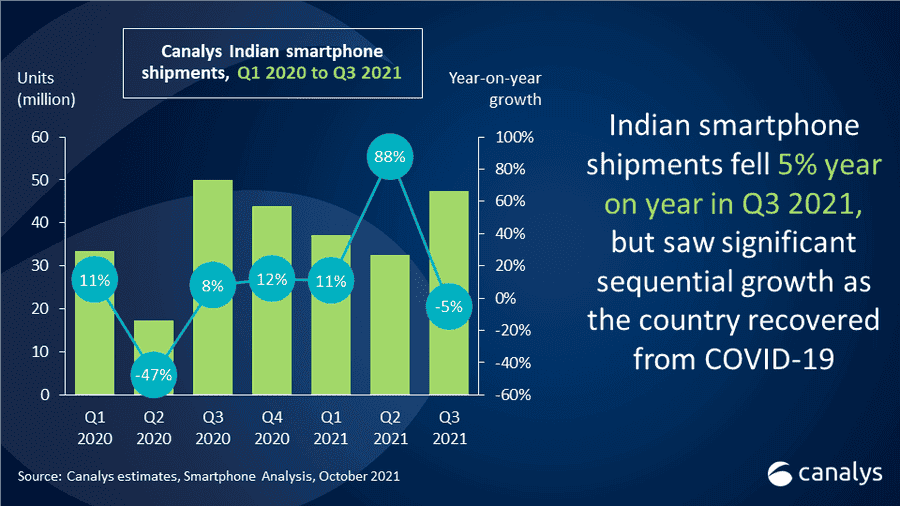 “Vaccine roll-out has been colossal for the Indian economy,” said Canalys Analyst Sanyam Chaurasia. “From the end of June, a surge in demand has swept India; which is set to persist during the festive season. Smartphone vendors have seized the opportunity to push the older stock into the channel ahead of the holiday period. But low-end model supply constraints mean shipments have been restricted; and brands have been forced to use promotions to make their high-end models more appealing. These challenges will persist into Q4, and high component and logistics costs; together with container shortages will result in longer lead times and higher retail prices. But smartphone brands are striving to minimize the impact on Indian customers; and will prioritize online channels where possible to provide a margin buffer that may allow for less price disruption.”

“The fight for market share intensifies further in India,” said Canalys Research Analyst Jash Shah. “Smartphone vendors are using a range of strategies, from extending their product mix to boosting their channel coverage; to increase shipments and value. Xiaomi, for example, used its Mi 11 series to raise its share in the premium segment; despite a slight drop in share overall. Apple, its main competitor for high-end share; used promotional deals to inject momentum into iPhone 12 sales ahead of its iPhone 13 launch in September. But Realme is taking a different tack, hoping to undermine high-end vendors with its focus on affordable 5G. Its shipments were 70% online, and it shipped around 1 million of its Realme 8 5G. Competition is unlikely to let up anytime soon; as challenger brands such as Transsion attempt to scale up and disrupt incumbents in India.”