Apple held another virtual event this week to showcase new products, including the flagship MacBook Pro 16 and MacBook Pro 14 laptops. A few days after that, the first photos and videos began to appear on the Web showing the real appearance of the new Apple laptop computers.

One of the first live photos of the 14-inch version of the MacBook Pro on his Twitter page was published by YouTube blogger Luke Miani. The picture shows the new MacBook Pro 14 alongside the 13-inch MacBook Pro of the previous generation, so you can see all the design changes at a glance, including the bangs at the top of the display. The blogger note that he received this photo from one of the users of the Reddit community. 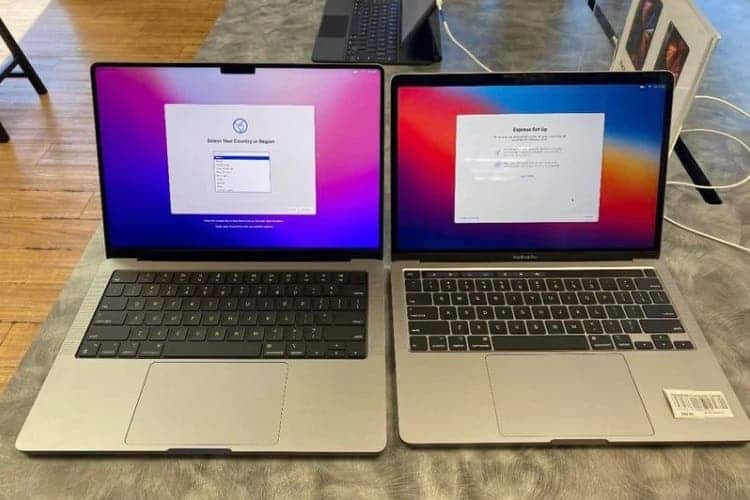 As for the video, it was also originally available on the Reddit platform. Later, the video was removed from there, but then it appeared on YouTube. Recall that the first buyers who pre-ordered the MacBook Pro will start receiving laptop computers only in a few days.

Introduced this week, Apple’s laptops have a new design and powerful hardware based on the company’s proprietary M1 Pro and M1 Max processors.

The next generation MacBook Air will feature a Mini-LED panel display, similar to the latest 14- and 16-inch MacBook Pros, according to DigiTimes. According to the source, the new product will be presented in 2022.

DigiTimes previously predicted that Apple is preparing a MacBook Air with a 13.3-inch Mini-LED matrix. The publication has now confirmed this information, citing reliable industry sources. Additionally, the report says the 11-inch iPad Pro will likely also receive a Mini-LED panel in 2022. Recall that in 2021, the Mini-LED display only received the 12.9-inch iPad Pro. It is important to note that DigiTimes’ announcement coincides with the words of analyst Ming-Chi Kuo; who has repeatedly stated that the next generation of MacBook Air will receive a Mini LED matrix.

As a reminder, Apple introduced the 14- and 16-inch MacBook Pros on Monday, the first Apple laptops with Mini-LED displays. Until now, the company has equipped only the Pro Display XDR professional monitor; and the 12.9-inch iPad Pro with screens of this type. However, we will for sure get new confirmation of the recent news.

Next Honor Play5 Vitality Edition front design has been revealed