Honor is gearing up to introduce a new member for the Honor Play5 series dubbed Honor Play5 Vitality Edition (or Youth Edition / Lite if you prefer). The new handset will go official tomorrow, October 25, in China. Also, in a couple of days, the brand will be disclosing the new Honor X30i and Honor X30 Max smartphones in the country. So this will week will be quite busy for all enthusiasts of the Honor brand. For now, there is still no word on the release of these devices outside China.

Ahead of the Honor Play5 Vitality Edition unveiling, the company has unveiled new posters to confirm its design. It’s quite a surprising move, but in this world of leaks, it’s better to be the first leaking details of its smartphones, right? Today’s leak reveals the handset display and now we have the complete design of the handset.

If you recall, the first poster, which was released last week, confirmed the rear design. The device will come with a square-shaped camera module with three camera units and an LED flash. For security purposes, the handset has a side-facing fingerprint scanner, which also serves to confirm the nature of this display as an LCD.

The new poster confirms that the Honor Play5 Vitality Edition will come with a pill-shaped camera cutout. This is a concept that is slowly disappearing, but Honor and Huawei are still betting on it. As a result, we can expect two cameras in the front. However, don’t hold your breath as this can be the main camera + AI camera combo rather than a main + ultrawide setup. Anyway, the display will be quite bezel-less with a screen-to-body ratio of around 94.4 percent. The handset will arrive with 66W fast-charging, 8 GB of RAM, and 128 GB of Internal Storage.

Honor X30i and X30 Max specs have been teased

Interestingly, the company also shared posters for the Honor X30i. The poster basically showcases the handset’s slim profile. According to recent leaks, the device will measure 7.45 mm in thickness and will weigh just 175 grams. Specs-wise, it is said t come with a 6.7-inch Full HD+ display with a 90 Hz refresh rate. There will be a single 8 MP selfie snapper, and a 48 MP main camera in the back. Under the hood, the device will carry the Dimensity 810, 4,000 mAh battery with 22.5 W fast-charging. 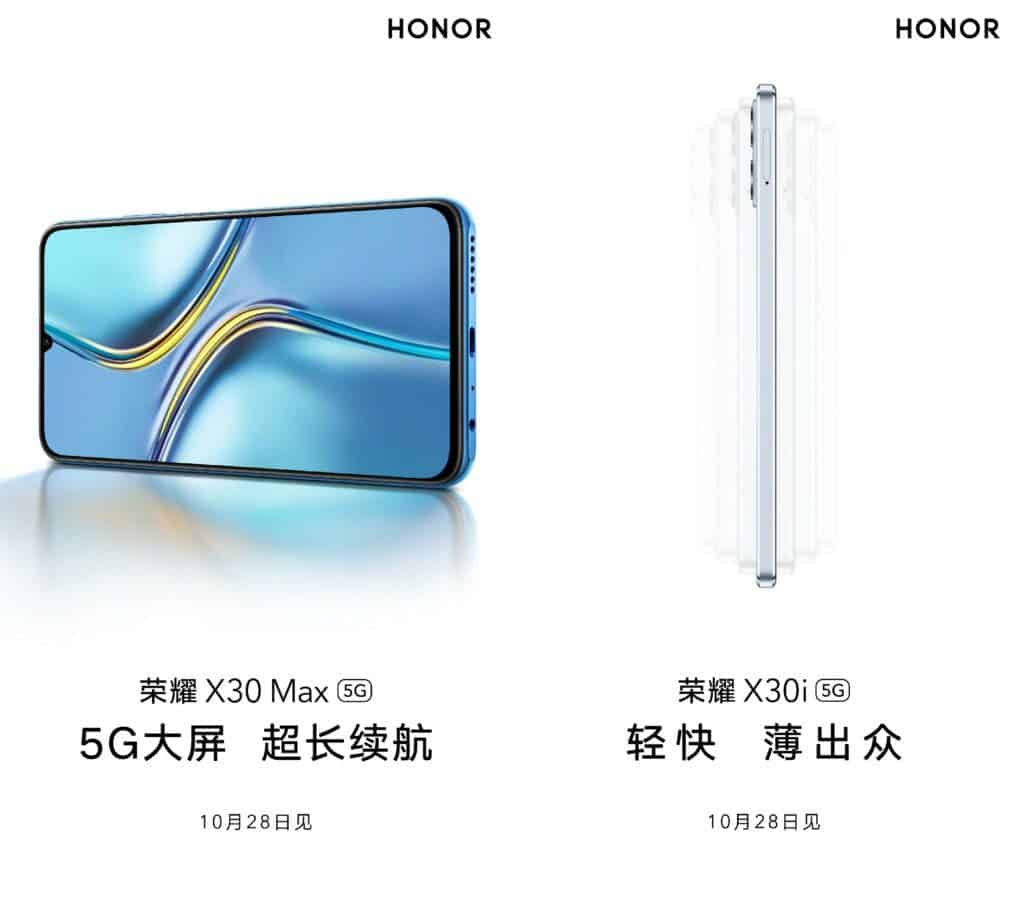 Honor X30 Max poster confirms it will come with a dewdrop notch display with a slightly thick chin. This is slightly disappointing, as the device may end being bulkier than it could have been with slim bezels and a punch-hole. According to reports, the panel will have a 7.09-inch diagonal and will offer Full HD+ resolution. The notch will serve as a home for the 8 MP snapper. Around the back, there is a 64  MP main camera and a secondary snapper. The device is said to draw its powers from a 5,000 mAh battery with 22.5 W fast charging.

We’ll know everything about the Honor Play5 Vitality Edition in just a couple of hours. However, we can still have more details to surface about the Honor X30i and X30 Max to emerge in the coming days.

Next 2nd Generation Huawei VR Glass To Launch Before 2021 Ends