The 108MP cameras are a thing of the past as brands are now pursuing the new 200MP trend. However, there is still room for alternatives in the between. Rumors have been suggesting the presence of a new 160MP camera within the Honor 80 Pro+. However, a new confirmation from Honor itself puts this sensor on the standard Honor 80 Pro.

The Honor 80 series will be introduced on November 23 in China. The brand will announce the vanilla, SE, Pro, and Pro+ models. The Honor 80 Pro+ will take the lead of the family, but the standard Pro will be impressive as well.

Honor confirmed the spec through a Weibo post. It shows the Honor 80 Pro with a center-aligned dual-camera setup. The 160 MP camera is clear in the announcement, but the details of this front setup are unclear. Some reports suggest that the Pro+  variant will get the same dual-notch, and it will comprise two 50 MP cameras. 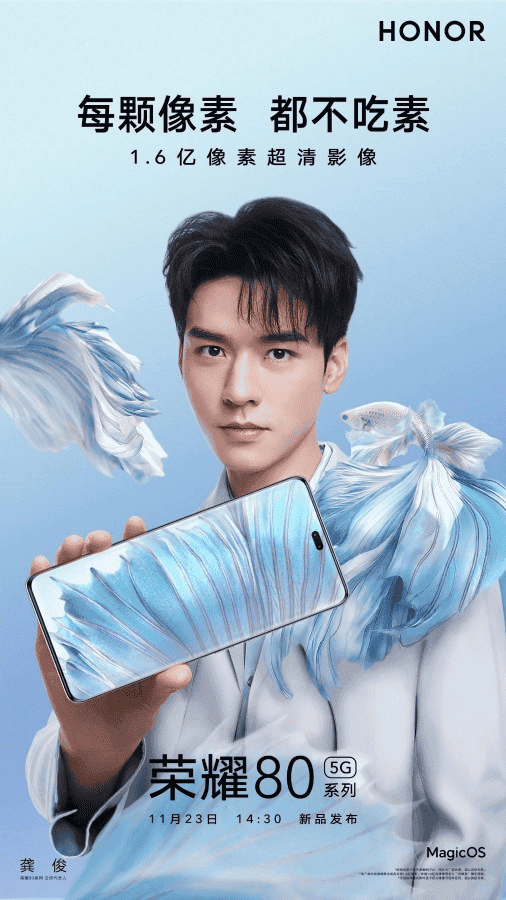 The teaser suggests that the Honor 80 Pro camera has support for “up to 160 MP” shots. We don’t know exactly which camera Honor is using in this setup. The 160 MP shots can be the result of a software trick, however, that is not well seen by customers. Perhaps, the same snapper will be inside the Plus. But we should wait and see, after all, recent reports also have been pointing to the 200 MP ISOCELL HP1. So we’ll have to wait and see.

The Honor 80 Pro and the Plus variant will come with Snapdragon 8+ Gen 1 SoC. Meanwhile, the vanilla Honor 80 will bring an all-new Snapdragon 782G. This mysterious Qualcomm chipset will make its debut in the new phone.

The devices will debut a new Honor Magic OS set to replace the Magic UI. We expect it to be based on Android 13. For now, there is no word regarding the global release. But the devices may eventually reach Europe a few months after their release in China.