Huawei had to change its software and hardware plans after the sanctions applied by the US government. As far as the software part is concerned, the company is having big challenges with Android due to the lack of Google Mobile Services. The Chinese firm found a way to go against that by developing its own set of applications and stores for its users in China. However, it still falls in relevancy when it comes to the global market. Huawei can use Android but will move soon to its HarmonyOS in a bid to offer the definitive experience that it can’t with Android-based EMUI. However, HarmonyOS seems to be still a little far for some handsets. Today, the company has disclosed the EMUI 12 roadmap for international smartphones. The updates will start to be deployed by the first half of 2022.

Unfortunately, Huawei didn’t specify what version of Android EMUI 12 is supposed to run. However, if we take the recently released Huawei Nova 9 as an example, we can assume that it’s Android 11. Back in the last year, the company announced EMUI 11 and it was still based on Android 10. The company explained at that time that there wasn’t a big reason for bringing Android 11 as it didn’t introduce changes. Moreover, the company pushes an agenda where users need to focus on EMUI and in the features offered by the skin, not on the underlying Android version. 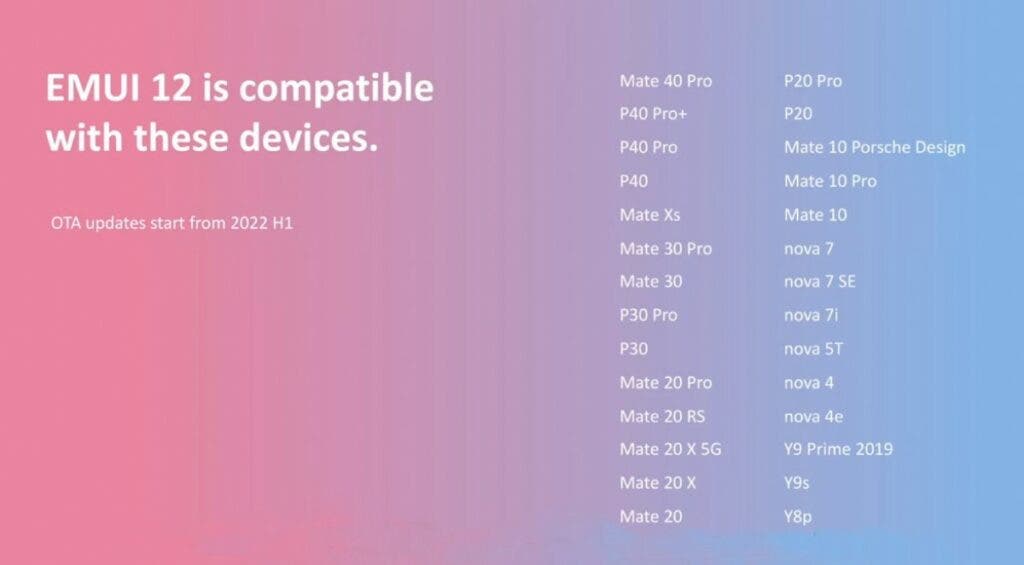 The list of devices getting EMUI 12 from Huawei includes:

Just like Harmony OS 2.0, EMUI 12 focuses on the integration of the Huawei ecosystem. It will provide easy file sharing and remote control of various Huawei devices. The update will also bring new animations and designs. We may also see a major change in the notification shade UI. It’s now separated into two – Swiping down from the left side of the status bar will open up the notification panel. Doing the same on right will summon the quick toggles, brightness slider, and media controls. It’s pretty much similar to the mode on MIUI