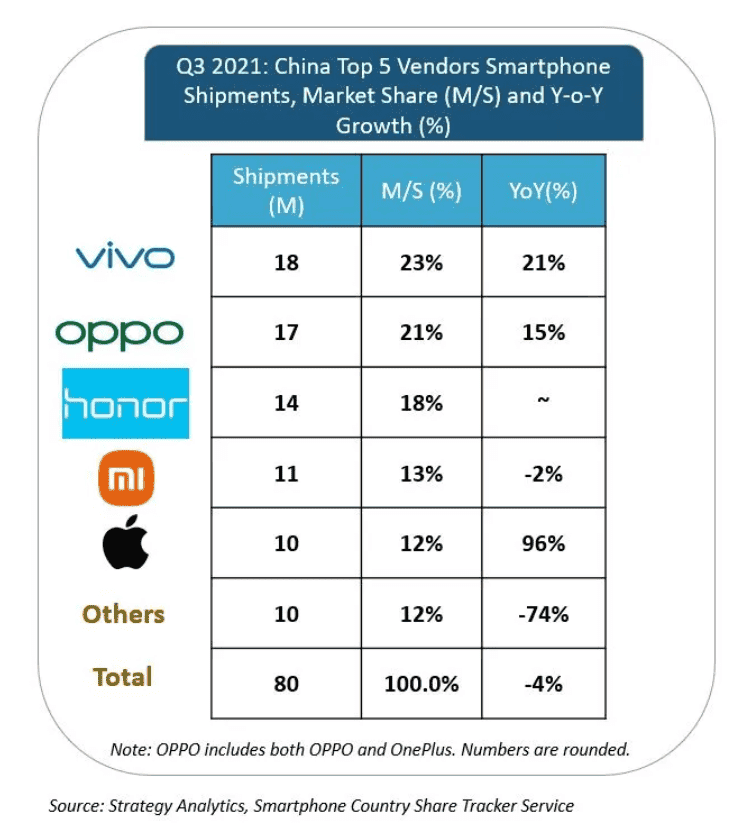 Interestingly, Honor ranks third in the Chinese smartphone market for Q3 2021. The company shipped 14 million smartphones in the quarter, an increase of 109% year-on-year. Looking at the performance of Honor, it is showing a strong rebound in the Chinese smartphone market. It appears that Huawei users are now turning to Honor devices. With the improvement of chip component supply and the strengthening of the product portfolio, Honor is grabbing market share from other Android manufacturers.

Xiaomi and Apple rank fourth and fifth with shipments of 11 million units and 10 million units, respectively. Xiaomi’s shipments fell by 2% year-on-year due to increased competition in the Chinese market. Apple’s new models are very popular among Chinese consumers, but they are suffering from a shortage of components.

In Q3 of 2021, the top five mobile phone manufacturers accounts for 86% of China’s smartphone market share, up from 85% a year ago.  Strategy Analytics expects that this ratio will continue to grow in the next few quarters as competition further intensifies.

Huawei was the top smartphone manufacturer in China for many years. However, due to the sanctions on the company by the U.S., the company is now nowhere in the top five list. As of the second quarter of last year, Huawei had over 30% in the Chinese smartphone market. However, just a year later, the company has only about 8%.

Counterpoint Technology Market Research also reported a significant shift in power in China’s smartphone market. Its report also shows that Vivo is tops with total shipments of about 18.3 million smartphones against 14.1 million a year earlier.