Elon Musk is known for his remarkable strides with his Tesla brand. The company is doing quite well and its CEO has been quite vocal. In a recent revelation, Elon Musk did not come up with the Tesla Motors name. According to the company, Elon had to send the nicest person in his team at the time to acquire the name. Eventually, Elon Musk was able to buy the Tesla Motors name for $75,000. Elon Musk also reveals that if he did not get the Tesla trademark, his company might have been called “Faraday”. However, a competitor is now using the Faraday name. 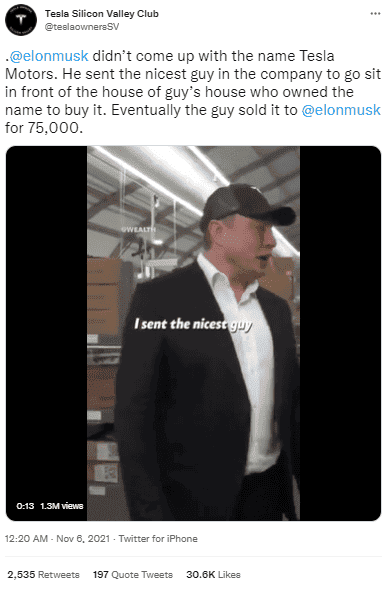 As we all know, “Faraday” refers to Jia Yueting’s car brand “Faraday Future FF”. The brand’s first car, FF91 will be mass-produced and delivered in July next year. The “competitor” Musk refers to is FF.

“In the development of humanity and Science, we’re allies rather than competitors. Let FARADAY and TESLA continue to be great in the 21st century. Hats off to the adventurers who dare to push for the progress of human civilization and create an intelligent electric mobility ecosystem”

A recent vote involving over 3.5 million Twitter users, Elon Musk must sell 10% of his Tesla shares. Earlier, the businessman put this issue to a vote on Twitter and promised that he would agree with any of the two possible decisions of the audience. 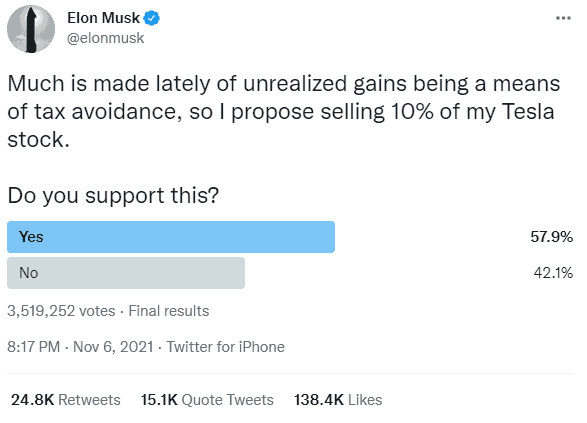 “I was ready for any outcome,” says Musk, who regularly makes provocative statements on Twitter. So far, he has not announced when and how he intends to sell his securities.

The vote was published by Musk after the Democratic Party of the United States initiated an additional tax on the super-rich. The new measures call for closer scrutiny of large shareholders – the latter is taxed only after the sale, and therefore shares are often viewed by lawmakers as a means of “legal” tax evasion. Musk had already criticized the Democratic proposals in late October. On Saturday, he returned to the question, tweeting that he intends to sell 10% of Tesla shares if Twitter users vote for it.

We know that as of June, Musk owned about 17% of Tesla shares; with a total value of about $ 208.37 billion. By selling 10% of the shares, he expects to earn more than $ 20 billion. According to the poll, 57.9% of users voted for the sale of shares – perhaps Musk expected a different outcome. One way or another, not everyone supports him in such an undertaking.