The Windows 11 operating system has been available to users for just over a month. The updated interface, support for Android applications and multitasking still attracted quite a few users during this time, but still many are afraid to switch to the new OS now. The Android Authority website shared the results of a survey of more than 8,000 respondents.

The website administration asked which of the visitors switched to the new operating system. As a result of a poll conducted on November 5 and published quite recently; it turned out that about 36.4% of PC users have switched to Windows 11; abandoning Windows 10 and other versions of the OS.

The rest of the users were divided approximately equally. About 13% of users have not yet updated, but they plan to. More than 17% do not have the system requirements so the computer does not allow updating; about the same weighs all the pros and cons, and about 16% do not intend to update the OS at all. As a result, about 63% of the portal visitors who agreed to take part in the survey have not yet been updated.

There is no unity among users. In the comments, some indicated that they are afraid of compatibility problems, others are satisfied with the familiar Windows 10 operating system, and others are afraid that the new operating system is still unsafe. Some even claim that they have already tried Windows 11 and “rolled back” to its predecessor, and some even to one of the versions of Linux. Many agree that it is worth waiting without disrupting your workflows in order to be a free beta tester for Microsoft.

Read Also:  A new beta version of Windows 11 with a lot of improvements is released
Join GizChina on Telegram 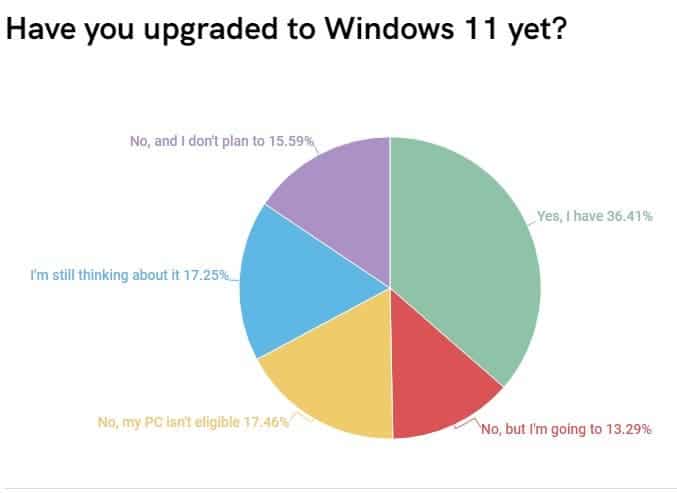 Last week, Microsoft expanded the Windows Subsystem for Android (WSA) testing program, which is present in Windows 11 and allows you to run Android applications on your computer. Whereas previously this opportunity was available to Windows Insiders on the Beta channel; now it is available to insiders on the Dev channel.

Since the WSA is currently in its early testing phase; there are only 50 Android apps available to users that they can download to their computer from the Amazon Appstore. At least for now, Amazon is the main source of mobile applications for Windows 11 computers; but it is possible that in the future there will be support for other platforms involved in the distribution of digital content for devices based on Android. We also expect that more applications will be available to users for testing in the coming months. Note that with sufficient qualifications, users can install Android applications by unpacking APK files.