Oppo is gearing up to introduce a new mid-range smartphone for its A-series. Earlier today, the handset emerged on Geekbench and FCC certification websites. Now, the design renders of the upcoming Oppo A55s have surfaced on the web, courtesy of 91Mobiles. The design renders are enough to confirm some of the features coming with this handset. For instance, we have a dual-rear camera setup and a punch-hole notch at the front. The leak also suggests that the handset will retail in at least two colorways – Black, and Mint Green.

According to the leaked renders, the Oppo A55s will have a design that is pretty much on par with other mid-range smartphones. It has a full-screen display with a sizeable chin at the bottom and a punch-hole notch at the top left corner. The handset will come with a dual-rear camera setup. Once again, we’re seeing another company jumping in this trend of two cameras. Brands are finally realizing that the number of cameras doesn’t matter if their capabilities are lackluster. We can expect the main camera with high resolution, and a secondary snapper with ultrawide angle view. However, things can be worse and the secondary snapper can be just a mere depth sensing module. 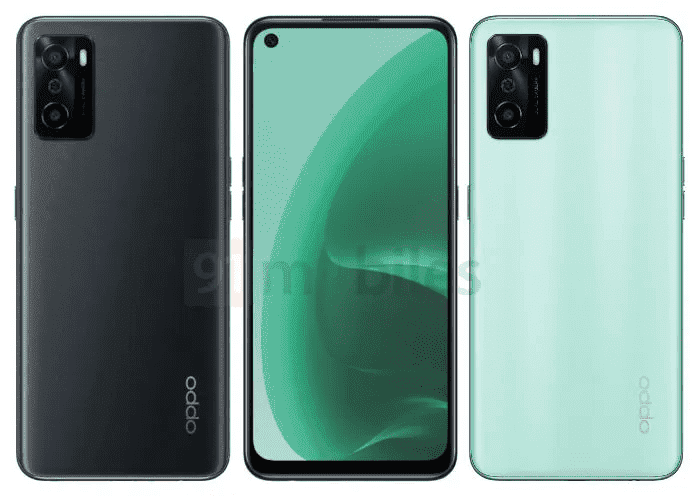 At the back, there is also the Oppo branding with a clean design. The fingerprint scanner is not present at the back neither is it doubling as a power button. According to a 91Mobiles report, Oppo is skipping the side-mounted fingerprint scanner in this handset. So now we can only assume that this device is aiming at the low-end segment. The right frame of the device houses the power button, while the volume rockers will sit on the left side. Despite the lack of a fingerprint scanner, the device probably will rely on face recognition for biometric authentication.

The Oppo A55s 5G has made an appearance on Geekbench and FCC database. For that reason, some of the key specifications of the handset are known. The upcoming Oppo A-series handset will carry a Qualcomm Snapdragon 480 SoC which is Qualcomm’s entry offering for the 5G segment. It is made on the 8 nm process and comes with an Adreno 619 GPU with X51 5G modem.

As per the Geekbench listing, the handset will also come with 4 GB of RAM and we assume it will be couçpled with 64 GB or 128 GB of Internal Storage. It will run Android 11 with the company’s Color OS 11 skin running on top. The handset will also offer a 3,890 mAh battery with 18 W fast-charging support.