Just as Xiaomi is getting ready to debut the Snapdragon 8 gen1 on the Xiaomi 12, the company is also working on other flagships. The Redmi K50 is another highly anticipated model and this device should debut in February or March after the Spring Festival. While maintaining a super cost-effective performance, this device will also bring very powerful performance. However, after multiple generations of upgrades, the K series is no longer a low-priced flagship. This series now brings a full range of flagship experiences. The Redmi K40 comes with a flagship design as well as an E4 OLED high refresh rate display. As the next-generation product, Redmi K50 will continue its previous strategy and continue to use an ultra-high-quality screen. 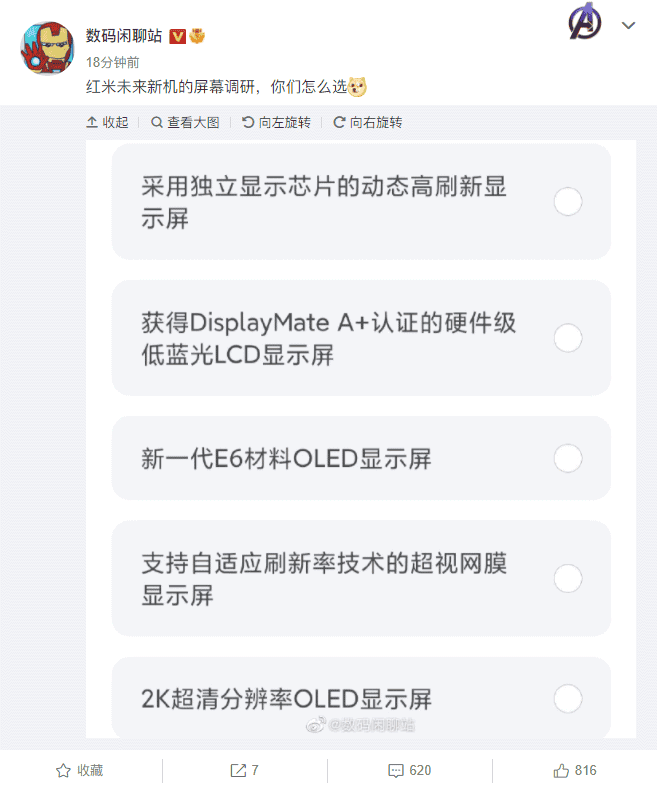 This morning, popular Weibo tech blogger, @DCS revealed that the Redmi K50 will come with a flagship display. According to the exposure options, Redmi’s internal planning for new products has five aspects: independent display, LCD, E6 material OLED, adaptive refresh rate technology, and 2K ultra-clear resolution. It is worth noting that the 2K ultra-clear resolution OLED, E6 material, independent display chip, and other specifications are all new configurations that have never been applied by the Redmi brand before. The Redmi K50 will likely be Redmi’s first 2K model and supports higher refresh rate adjustments.

Recently, Lu Weibing, Redmi’s general manager mentions the Dimensity 2000 chip for the first time. His Weibo post reads “What chip is Dimensity 2000? Everyone tell us……”. Thus, he is asking Mi Fans what they think about MediaTek’s upcoming flagship processor. It is not common for top company executives to mention products that they don’t intend to use. This post sparks speculations that Redmi will use this flagship processor.

The latest report on the Dimensity 2000 4nm flagship processor is that it will be having a new name. According to rumors, the company will change the name of this chip to Dimensity 9000.