Wi-Fi 6E is the most cutting-edge standard in the industry, but apparently, it will not keep the crown for a long time. Companies are working to push the speeds even further, especially with the advent of 5G which is a  crazily fast wireless system. According to recent reports, we may see Wi-Fi 7 sooner than expected as MediaTek is gearing up to showcase this technology during the CES 2022 event.

As expected, Wi-Fi 7 is said to bring significant improvements over the last generation. According to James Chen, MediaTek’s Associate VP of Product Marketing, Wi-Fi 7 will be around 2.4 times faster than the current Wi-Fi 6 and Wi-Fi 6E standards. Apart from significantly enhancing the speeds, the new standard is also claimed to offer much lower latency. This will be especially useful in fields like gaming, with fast-paced multiplayer titles requiring milliseconds to be as low as possible. 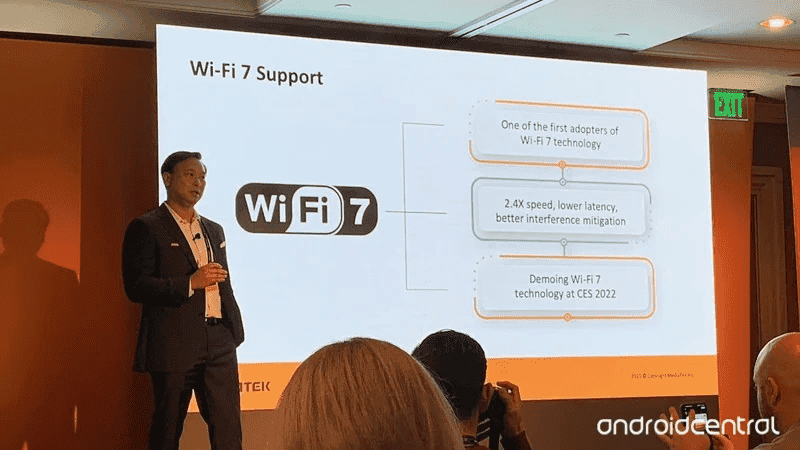 Furthermore, Chen added that Wi-Fi 7 will “play nice” with your neighbor’s Wi-Fi 7 network. To simplify things, it will use new technology to reduce interference from signals outside of your home. Chen states that the Taiwanese chipmaker will demo the new technology at CES 2022. However, the technology’s availability is not close. Apparently, it is still is “very early in the Wi-Fi 7 standardization process”. The official refrained from offering any finer details, although. He did say that we might see a launch in the second quarter of 2022. However, the official release followed by availability should only come by 2023.

Wi-Fi 7 should still be years away from customers

Worth noting that announcement, actual release, and availability are three different things. The standard can be announced next year, but this does not mean direct availability as the report states. Once it becomes “available” in 2023, it also does not mean that everyone will be able to enjoy this. Just like with Wi-Fi 6, companies will need to launch new devices that support the Wi-Fi 7 standards. Currently, not even Wi-Fi 6 is widely available in the industry. Most Smart TVs and Smartphones are only now getting support to the new standard and at a very slow pace. That said, Wi-Fi 7 availability might be several years away from most of the consumers.

Today was a big day for MediaTek. The Taiwanese held a keynote to disclose some of its plans for the future. It also revealed its next-gen Dimensity 9000 flagship SoC. This is the first chipset in MediaTek’s recent story that has the necessary specifications to compete in the flagship segment. In the next year, it will fight a fierceful battle against Exynos 2200 and Snapdragon 8 Gen 1, mainly with the latter.

Previous What is so special about Dimensity 9000? - Top 10 "world first" for this chip