For many years now, Huawei has been banned in the U.S. The company can not sell any gadget in the U.S. In fact, Huawei can not use American technology without special certification. Thus, it was a huge surprise when Huawei USA announced on its official Twitter handle that it has a special Black Friday offer. According to the tweet, all smartphones sold in the U.S. will enjoy a 100% discount. Immediately after posting the tweet, it attracted thousands of comments as well as retweeting. 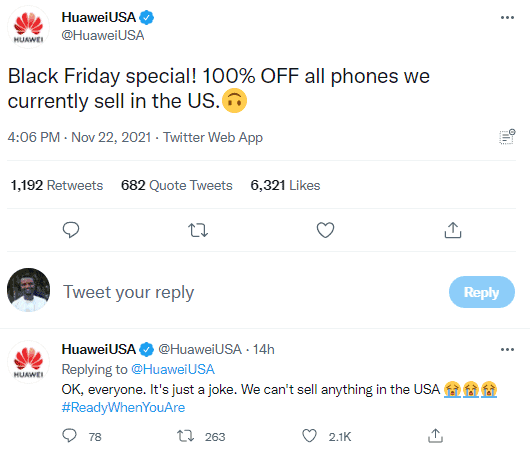 However, about an hour later, Huawei USA replied to the tweet informing users that it was all a joke. The company said, “OK, everyone. It’s just a joke. We can’t sell anything in the USA”. Of course, it had to be a joke because a 100% discount is absolutely ridiculous.

Until the bans a few years ago, the companyhad a fairly good relationship in the U.S. In 2018, it released the Mate 10 series at the CES conference in the United States. Because the US telecom operator Verizon abandoned cooperation with Huawei, Mate 10 series models can only be sold in the US open market and e-commerce channels. No operator in the U.S. can openly sell this smartphone.

In the past two years, following rounds of sanctions by the United States, Huawei’s mobile phone business has been blocked. In addition, the Chinese manufacturer has hit a bottleneck in the production of its Kirin chips. Presently, Huawei has no choice but to use Qualcomm chips, even at that, it can only use 4G chips.

According to Yu Chengdong, Huawei smartphones can work for 36 months without any sort of freezing. He claims that this is an advantage for its smartphones especially those with the Kirin 9000 chip. Test data shows that after 36 months in use, the fluency of Huawei Mate 40 Pro only drops by 2.5%. This is quite impressive considering that many three years old phones no longer get updates.