The Nubia RedMagic 7 is listed on the Bluetooth SIG with the model number NX679J. The moniker of the handset was confirmed on the certification website. It also confirms that the flagship gaming handset will offer Bluetooth 5.2 connectivity as a standard. Unfortunately, it does not reveal any details about the device’s performance. But given Nubia’s track record, we can believe that the company will stick with Qualcomm’s next flagship platform, the Snapdragon 8 Gen 1. 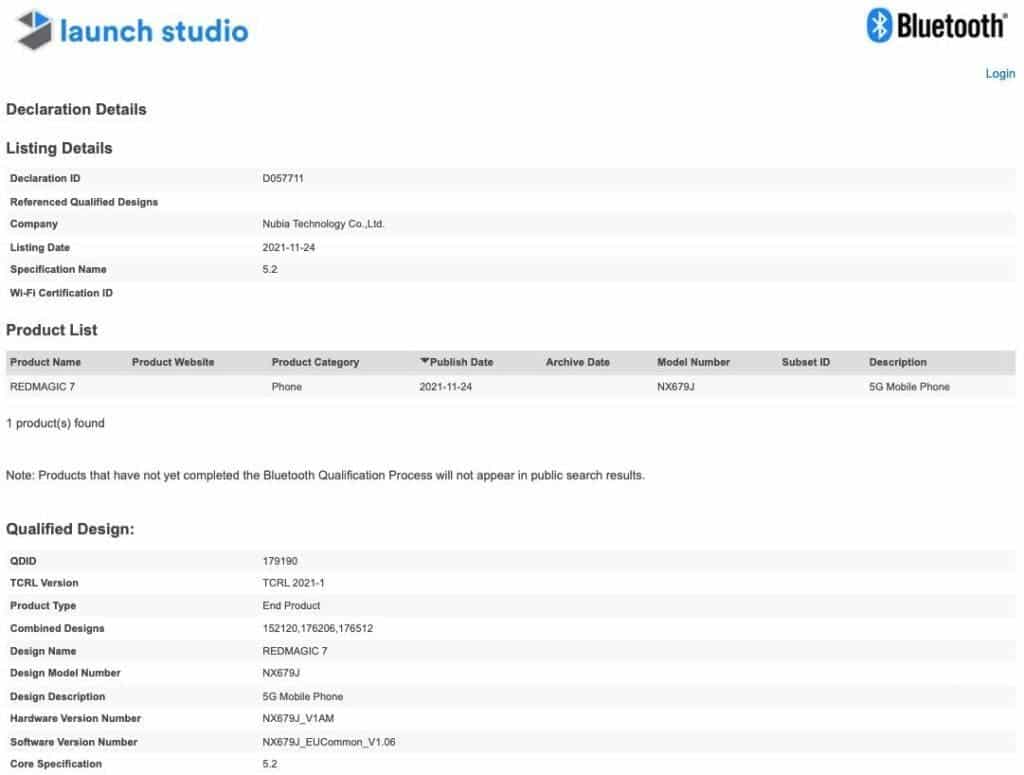 This is just the first time that the RedMagic 7 appears in the web. Since the launch is almost five months away, we can expect more details to keep popping out in the next few weeks. We’ll see it passing through a number of other specifications and more details will be revealed in the process.

The RedMagic 7 will most likely pack Qualcomm’s Snapdragon 8 Gen 1 SoC. This new platform will reach the market on November 30 and will bring a 1 + 3 + 4 cluster with the prime core clocked at 3.0 GHz, and three performance cores clocked at 2.85 GHz. There will also be four efficiency cores clocked at up to 1.79 GHz, as per the rumors. We will have to wait for the official event to get more details on the processor.

The company’s next gaming flagship will also likely bring a 165 Hz OLED display, up to 120 W fast-charging, and possibly up to 16 GB of RAM. As usual, Nubia will try innovative ways to achieve advanced and reliable thermal management with this handset. The device should bring decent flagship cameras, but this won’t be the focus of this handset. We also expect physical triggers, a big battery with at least 120 W fast-charging. The RedMagic 7 and 7 Pro should bring similar specifications, but the Pro may carry slight differences to make it more appealing.

Gaming smartphone enthusiasts will need to wait a little bit more for further evidence about the handset.