Despite the dominance of Android smartphones, among which there are quite decent models, the iPhone still enjoys stable popularity in the world. In the matter of competent “brainwashing” Apple has no equal and its adherents continue to acquire its devices with almost religious zeal. And the latest data from IDC analysts for the first three quarters of this year can bring sadness to Android fans.

According to experts, for the first three quarters of 2021, the iPhone 12 became the best-selling smartphone. At the same time, four Apple models entered the top 5 and only one representative of the Android camp – Galaxy A12 – managed to dilute Apple monotony. Samsung’s smartphone took the “silver”, leaving behind the iPhone 11, iPhone 12 Pro Max and iPhone 12 Pro.

iPhone 13 sales just kicked off in the third quarter, and they haven’t yet gained enough weight to compete with other devices. But with an eye on how joyfully a number of analysts are broadcasting about the increased demand for the iPhone 13, there is no doubt which model should become popular soon.

There is no information on the number of units sold for each model. Perhaps the numbers will be reserved for a report on the results of the whole of 2021; where they will tell about the reasons that led to the popularity of the iPhone. 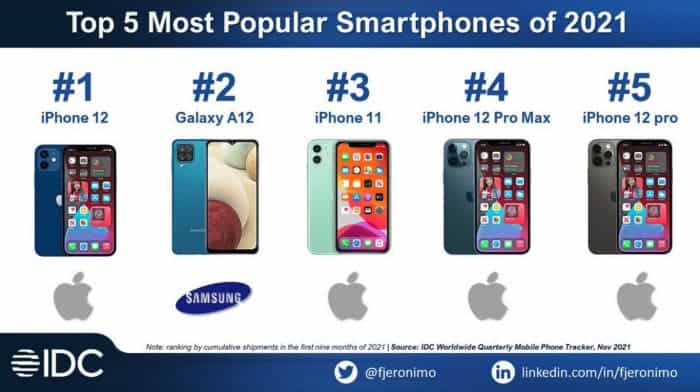 In the third quarter, Xiaomi faced the consequences of the global chip shortage, as mentioned in the latest quarterly report. According to Counterpoint Research and Canalys, the Chinese company; which only recently became the world’s second-largest smartphone maker; returned to third place in the third quarter, losing its position to Apple.

In reporting its financials for the quarter, Xiaomi said its business was hit hard by an ongoing chip shortage; which will persist in the first half of next year. In the third quarter of 2021, the company sold 43.9 million smartphones worldwide; down about 6% from the same period a year earlier. Xiaomi has called smartphones the “cornerstone” of its business, which also includes a number of other products. This year, Xiaomi announced the launch of an electric vehicle business. The company said it will begin mass production of its debut model in the first half of 2024.

The company surprised investors this summer after it surpassed Apple to become the world’s second-largest smartphone maker. In the second quarter, the company’s sales rose sharply; thanks to which Xiaomi was second only to Samsung in terms of the number of smartphones sold. Since then, the company has been hit hard by supply chain problems.

Counterpoint reports that Xiaomi has been hit harder than some other companies due to the vast range of devices it produces. In the third quarter, the company offered over 50 different smartphone models, while Apple sold 14 different devices. In addition, Apple benefited from strong iPhone 13 sales. A recent Canalys report showed that Apple accounted for 15% of global smartphone shipments, up 1% over Xiaomi.

Previous Samsung will increase the number of Exynos devices in 2022