According to popular Weibo tech blogger, @DCS, the Snapdragon 870 version will feel premium if you are not seeking ultimate performance. The appearance of the Xiaomi 12 mini is similar to the Xiaomi Civi, Recall that the Xiaomi Civi is dubbed the most beautiful Xiaomi smartphone in its history.

Furthermore, @DCS reveals that the Xiaomi 12 mini will come with a curved screen design. This means that it retains some of the design plans of the Xiaomi 12 standard version. If this is the case, then this mini model is just like the SE mid-range version of the digital series.

The Xiaomi 12 mini recently got the Chinese 3C certification. The certification shows that this device will come with a 6.3-inch 1080P screen. Looking at the screen size, there is nothing “mini” about this device. However, thanks to the ultra-thin bezel of this device, an average 6-inch smartphone can now have a 6.3-inch display. The overall size of the 6.3-inch smartphone should not be too large. It will be a “small screen” flagship that supports one-hand holding. 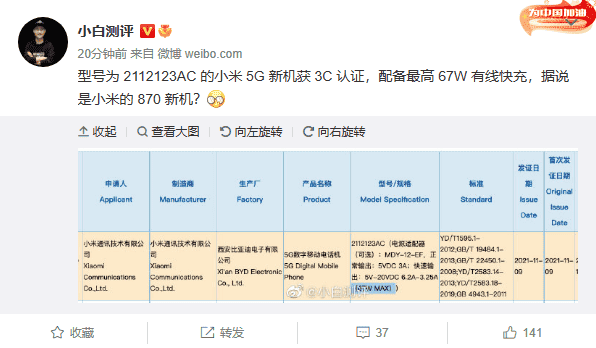 According to the 3C certification data, the new machine model is “2112123AC”. This device supports 5G and it comes with 67W wired fast charging. According to speculations, this smartphone will use the Snapdragon 870 SoC.

In addition to the SD870, Xiaomi 12 mini will come with UFS 3.1+LPDDR5 storage specifications. Furthermore, the Xiaomi 12 mini will come with a built-in 4200mAh battery that supports 67W wired and 50W wireless charging. Going by Xiaomi’s tests for this charging capacity on a 4000+ mAh battery, this device should get a full charge in about 20 minutes or less. Also, the Xiaomi mini will support three-dimensional dual speakers, X-axis linear motor, NFC, infrared remote control, etc. This device can be considered as a “real flagship with a small display”.

Next Honor 60 appears in live pictures revealing some changes