Popular messaging platform, WhatsApp, recently launched a new feature that allows users to automatically delete messages. In addition, it also launched an end-to-end encryption function for one-to-one chats to enhance security. WhatsApp recently adds a new function that extends the “delete” time of messages after reading. Users can choose to clear the message automatically after 24 hours, 7 days, or 90 days. Previously, there was only an option of 7 days. Please note that the messages will only auto-delete if you have read them. While this mode is good for some users and clears your chats, some information may be vital. Thus, users may need to keep this information. 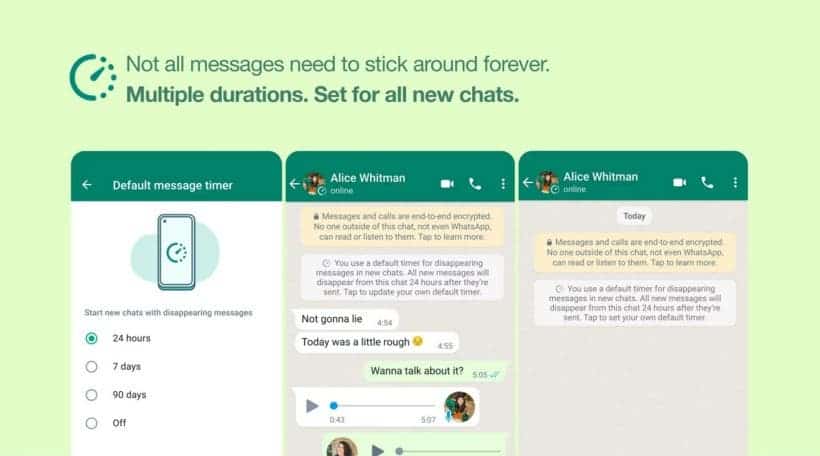 In such cases, WhatsApp recommends that users should screenshot such important chat history. For now, this is the only way for users to save some of the chat histories. WhatsApp officials said that WhatsApp users can also enable this feature for all chats by default. It should be noted that turning on the auto-delete feature does not mean that the other party’s terminal will also lose the chat history. The recipient of the chat can keep the chat history for as long as they want whether you delete yours or not.

The WhatsApp feature has been gradually rolled out for iOS and Android clients. If users do not receive the update, they may have to be patient. The update will be available for all users pretty soon.

A few months ago, WhatsApp released the variable speeds for voice messages feature. Now, the application is developing the same function for other audio messages. Currently, these audio messages still need to be listened to at a regular speed. WABetaInfo confirmed that WhatsApp is developing related audio variable-speed playback functions. The company is working to improve the ability to implement different playback speeds for all audio messages.

For now, when you forward a voice message, it is impossible to increase the audio playback speed. This is because the playback speed button is not available. However, it appears that the company will add this feature in the future.

WABetaInfo claims that the feature “was discovered in the recent WhatsApp iOS beta, but is currently under development”, which means that there is no public beta. WhatsApp audio messages can only display 2x playback speed. However, it will definitely increase the playback speed by 1.5x thereafter. This feature will be useful for users who lack the patience to listen to long audio messages.