The year 2021 is coming to an end, and soon analysts of all stripes will sum up its results, tell about the main trends in its development. But now they still continue to analyze the smartphone market for the past third quarter; and this is what Canalys experts have done.

They concluded that the chip shortage continues to impact the market. 320 million smartphones were shipped, which is 6% less than a quarter earlier. The first line of the rating is occupied by Samsung; whose market share is 21% and shipments of its mobile devices amounted to 69.4 million units. Apple came in second with 44 million iPhones shipped, and its share is 14%.

The third-place belongs to Xiaomi; which has managed to put 44 million smartphones on the market, and its share is 14%. Oppo and Vivo followed, with 11% each.

Separately, analysts noted that Apple’s success was driven by the sales of the iPhone 13 series, which they bought quite well. The company plans to deliver 170 million devices to the market; in the first quarter of next year and should grow by 30%. But shipments of Android devices are declining. On average, the decline was 9%, but not for all companies and not in all markets. 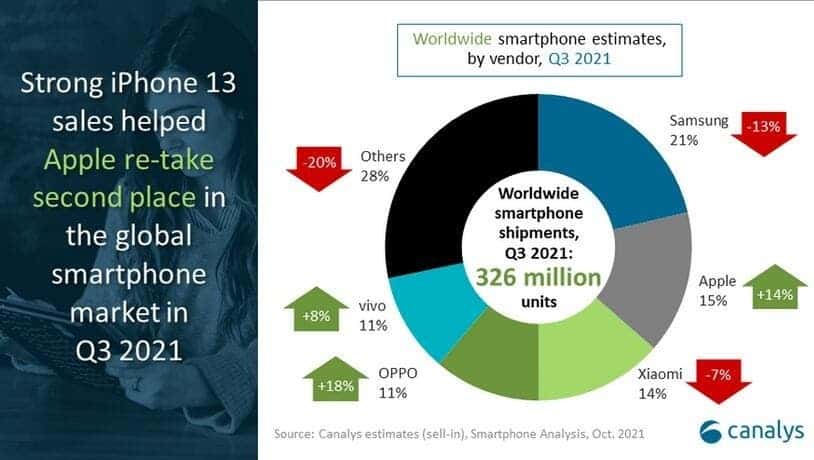 The production of Apple‘s flagship smartphones belonging to the iPhone 13 family in September and October was 20% lower than previously planned. To make matters worse, the situation precedes the holiday season; in which the demand for electronics has traditionally been growing at a rapid pace.

With the release of the new iPhone 13 and new iPad in September, Apple is under serious threat as the company is unable to cope with global chip shortages and supply chain disruptions even on its own local scale. Tim Cook, CEO of Apple, told Reuters that supplier problems will only get worse compared to the previous quarter during the holiday sales season.

In October, for the first time in a decade or more, iPhone and iPad assembly was reportedly halted for several days due to supply disruptions and electricity restrictions in China.

In September and October, shipment reallocations further weighed on iPad assembly; dropping 50% of planned tablet shipments this month, and forecasts for previous-generation iPhones fell about 25%.

Moreover, at the beginning of the month, Apple warned component suppliers about a slowdown in demand for the iPhone 13 from buyers; which indirectly indicates a drop in user interest in updates to the latest gadgets.