Now comes a hot time in terms of summing up the results of the outgoing year. Our colleagues from AndroidAuthority decided to name the most underrated smartphones. When compiling a rating, they decided to rely on the opinion of users and conducted a corresponding survey.

Here are the most underrated smartphones of 2021

More than 1400 users took part in the survey and the majority (35.09%) considered the Sony Xperia 1 III the most underestimated smartphone. As a reminder, this smartphone has a 3.5mm headphone jack, a 4K OLED panel with a 120Hz refresh rate, a microSD card slot and a telephoto zoom lens.

On the second line was Asus Zenfone 8, which was votes from 22.5% of respondents. This is a compact smartphone by modern standards, which has received water resistance and an audio jack, and was estimated at $ 630. Closing the top three is Vivo X70 Pro + (14.7%), sporting water resistance, a QuadHD + screen and wireless charging. 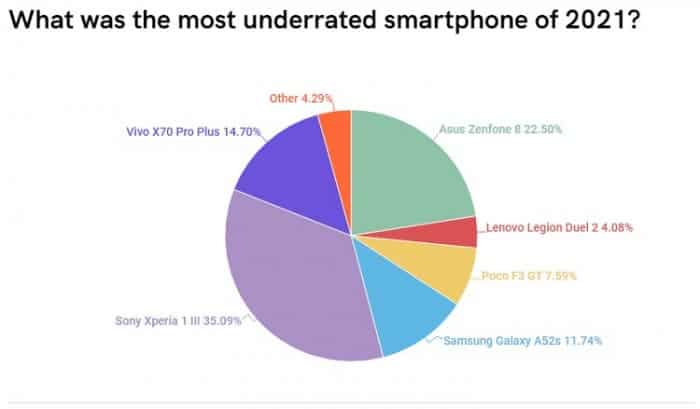 Previous Xiaomi confirmed the announcement of Redmi K50 with Dimensity 9000

The most popular smartphones in the first three quarters of 2021