In a few days (December 28), Xiaomi will officially release the Xiaomi 12 series. As the launch date for this device draws closer, we have more information regarding this series. The official teaser of this series shows that the Xiaomi 12 and 12 Pro will use the new Snapdragon 8 Gen1 processor. After several months of alliance and adjustments, Xiaomi now has a “perfect” chip for its flagship series. According to the company’s CEO, Lei Jun, a different good experience will be presented by the “faster and more stable” Xiaomi 12. 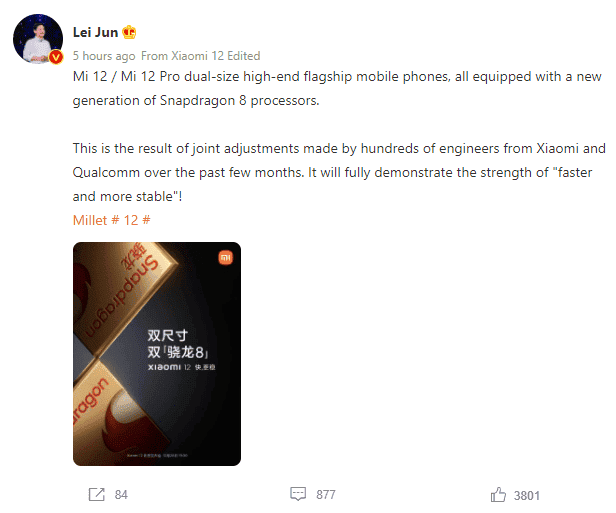 Lei Jun further stated on Weibo that Xiaomi’s high-end mobile phones have officially started to benchmark against Apple and learn from Apple. Xiaomi 12, a small-sized high-end flagship with top experience and configuration. He further claims that the overall feeling of the Xiaomi 12 is superb. Also, the Xiaomi 12 Pro is an all-round high-end flagship. It comes with the ultimate configuration and experience.

In addition, Xiaomi 12 series may also arrive with MIUI 13 out-of-the-box. Recently, when Lei Jun communicated with netizens, he said that MIUI is making every effort to improve and will definitely do better.